We fire away with 10 questions on the topic of all things Abe Sapien as we talk with Alise Gluskova, the Hellboy spin-off title’s newest penciler. 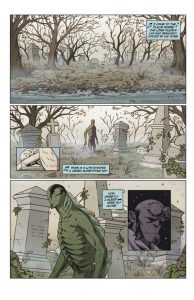 A short while back, our comics editor Kevin had the chance to talk with artist Alise Gluskova. You might recognize Gluskova’s name from her current stint on one of the biggest Mignola-verse titles out there – Abe Sapien.

Her style is something of a departure from what you usually find within the pages of a Hellboy-related book, with what looks to be a little bit of an anime influence to it. It’s pretty darned awesome as well, to be perfectly honest, so that helps too.

Only Gluskova’s second issue in the run of Abe Sapien, issue #28 will be hitting racks and digital download storefronts soon, so watch out for that. If you want to catch her first issue, that’s available right now.

As for our interview with the artist, scroll on down and you’ll find the 10 ‘Qs’ and ‘As’ that Kevin assembled, all arranged and set up for your viewing pleasure.

Kevin: How did you get started in the comic book industry?

My passion shifted thanks to working on motion comics for a couple of years in a studio, and I was completely immersed in the comics industry. I visited comic book sites, read interviews, and listened to podcasts. My interest grew over those couple of years. I fell in love with this industry and I still have the same feeling about it. But I’d been reading Hellboy, B.P.R.D., and even Spiderman, long before I decided that comics was the way to go. 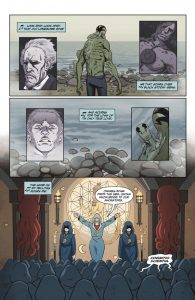 Kevin: What do you like about being a comic book artist?

Alise: Probably the fact that I can help tell stories, or make my own in this amazing visual and written format. In the end it’s really nice to make a script unfold into an image.

Kevin: What don’t you like about being a comic book artist?

Alise: I don’t have a particular thing that I don’t like, or that’s really bothering me. Maybe my only problem is that I live too far away from people and friends that I can talk to in real life about comics.

Kevin: I was told Abe Sapien #27 is your first full issue of art.  Any worries?

Alise: It would be a lie if I said I had none. I was worried about people’s reaction toward the style of art, but so far I’ve gotten positive feedback.

Kevin: Whose work, artistic or otherwise, do you admire?

Alise: Too many to name them all, but: Mike Mignola, Becky Cloonan, Tyler Crook, Bengal, the Fiumara twins, Babs Tarr, Cameron Stewart, Kelly Sue DeConnick, Jason Latour, Dave Stewart, Dan Jackson, and I could go on naming forever, because I admire so many.

Kevin: What are the physical and mental stresses in the job of a comic book artist?

Alise: Probably the fact that you might end up sitting all day in an apartment without ever looking outside the window. And if the deadline is tight, then having the inevitable stress and worries, and losing your sense of self care. 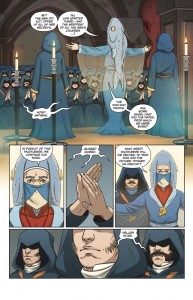 Kevin: What kind of person does well in this job?

Alise: People who are patient and are able to work with other people: with the writer and editor. People who can work and produce art on a regular basis, if they’re working full time as a comic book artist. Because you can’t decide you don’t feel like drawing for two weeks—you can’t do that when you just start and are in the middle of a project.

Kevin: What’s next for you?

Alise: To be honest I have no idea at the moment. Hopefully I can get my next comic project to work on sometime soon. I’m excited to find out what awaits me next.

Kevin: What comics do you read now, if any?

Kevin: Where do you see yourself in the future?

Alise: Hopefully I’ll continue working as an artist on comic books with other creative people. And hopefully, in the unforeseen future, I’ll be working on my own creator owned project.