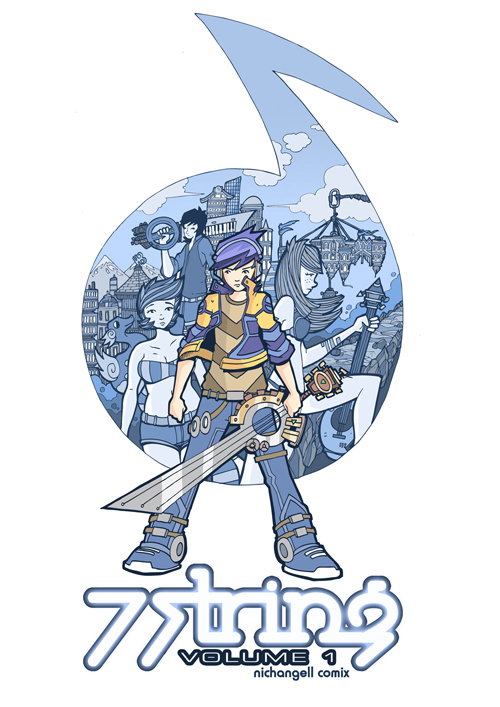 7STRING is an on-going series of graphic novels created by comic book artist and illustrator Nich Angell. 7STRING brings readers an action packed and colourful all-ages adventure; along with characters and designs that are modern, unique, fresh, funky, and are street art inspired.

When a terrible tragedy befalls the hero Zach, he heads out with his guitar sword into a world of music for revenge. Unfortunately this tragedy has caused Zach to be cut off from his emotions, and he must learn where music truly comes from in order to defeat a great evil who is looking to plunge the peaceful world of Melodia into war.

Nich Angell is a UK based comic book artist and illustrator and grew up in Salisbury which is a town in the south near Southampton. While it’s a nice country town Nich Angell says that it wasn’t for him at all, since he had aspirations to do and work in something more modern and cutting edge. As a kid he grew up on sci-fi because his parents as he described are huge sci-fi nerds.

His dad had loads of novels and Nich Angell had spent ages looking at the cool retro work on their covers. He believes that those two things had a huge impact on his upbringing and desire to tell cool looking stories.

Up until he was 11 he wanted to be a paleontologist. (A scientist who studies life of the past, such as fossil remains.)

Even though creating comics have grown into a business and a career, Nich Angell shared that they still occupy the hobby portion of his life. There is nothing more he looks forward to in his spare time than drawing and creating new stories, and characters. Nich Angell is also a gamer and is a huge fan of Nintendo, loves RPGs, and board games. He and his friends have regular game nights.

Nich Angell has been working on comics for years but before 7STRING he hadn’t created a graphic novel.

“I did lots of short black and white sci-fi one offs such as ‘Gossamer Blue’ which was a story about a space station for psychics, the ‘Asimov’ which was about a ship that would survive the end of the universe, and ‘The Infinity Cascade’ which served as a sort of prelude to 7STRING about a piece of music that was heard through all of space.”

The talented comic book artist and illustrator explained in detail how he came up with the idea for 7STRINGand what served as an inspiration to him.

He said it was a culmination of many things.

“For my first graphic novel project I really wanted to bring a lot of my favourite things together in one comic so that I would always be excited about working on it, and wouldn’t give up.

So I take inspiration from a lot of places. The main place was music jam sessions though. I used to jam a lot with friends at uni and the feeling of making music by the seat of your pants sort of felt similar to me to making quick decisions in battle. The idea of 7STRING was born.”

Nich Angell went into detail how devoted he is to world building.

“I’m a huge devotee and fan of world building and as such spent a great deal of time focusing on the world, layout geography, politics and cultures of the world of Melodia. It was important to me to create a believable but fantastic, living and breathing world. Melodia is split into 4 clefs, 4 tribes almost that live in harmony across the whole planet. Each clef is devoted to a different kind of music but the Troubleclef, masters of Percussion are the ones to watch.”

Currently the creation of 7STRING is on-going since Nich Angell has plans to release a total of 7 volumes of 7STRING, and volume 1 is available now on Amazon. He also recently just wrapped up his Kickstarter campaign on October 30th for volume 2 which was a success. 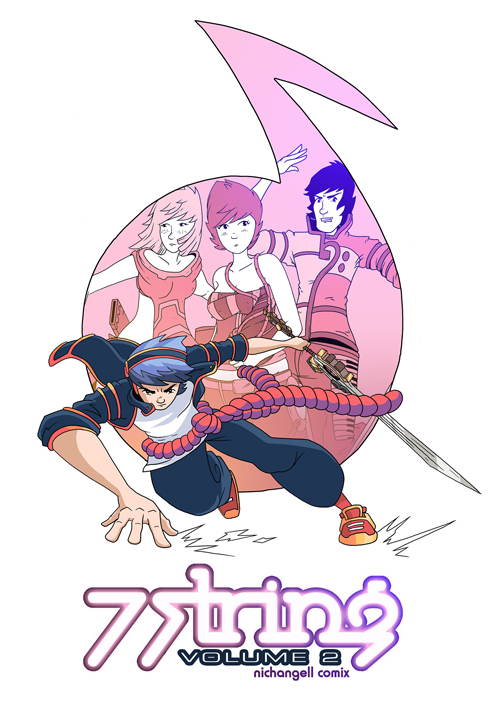 “Volume 1 took about a year working on it when I could between day job and freelance illustration gigs. Volume 2 was quicker, maybe 4 months? When I start a comic concept I write the whole thing out in long form, sort of like prose, like a novel,“ said Nich Angell.

“It’s not very detailed though, except in certain places where I go into detail to clear things up like certain character developments or dialog ideas I have at the time. Then I start drawing and usually fly by the slit of my pants, working out organically how much story I will tell on each page and working through the script. For more complicated action and fight scenes I thumbnail all the pages as tiny scrappy drawings of the whole pages and then work from that to make the big ones.”

Nich Angell discussed a big challenge he encountered during the creation of this graphic novel. The challenge was writing convincing and believable character arcs and developments, and emphasized that he needed something to happen to a character in order to progress the story.

“I had this one point in the script where I REALLY needed something to happen to a certain character to progress the story in the direction I wanted it to go. But I realized none of my cast would do this thing to this character. It wasn’t in line with their personalities. I had to backtrack quite a bit to get the story to a place where it would work. I encountered lots of similar challenges to that.”

When it comes to how Nich Angell would describe himself as an illustrator and writer in both style and personality, he expressed that he focuses on the fantastic.

“I’m not interested in telling a story that doesn’t have an aspect of the impossible, the epic, the awe-inspiring, or even the unlikely. Therefore my writing and drawing is all firmly rooted in sci-fi and fantasy, or more often than not, a fusion of both.”

The most rewarding part of this project for Nich Angell was hearing the audience’s lovely feedback and compliments, and discovering from them that he has achieved his personal mission: To give back stories like the ones that captured his imagination.

Special thanks to Nich Angell for chatting with me.

You can visit Nich Angell here: