DC Comics has a dynamic duo of Superman one-shot issues on the way to stores this May. The oversized books will be tie up loose ends for both books. And they’ll also usher in a brand new era for the Man of Steel.

Two endings and a beginning 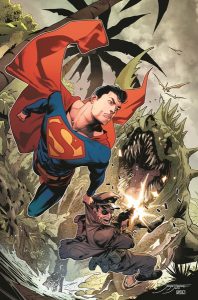 These are no simple “special issues” of Action Comics and Superman. Nope, these one-shots are meant to close out two recent runs of the books, and start another. That’s not to say that we’re looking at fresh number ones though, as both numbered series’ will continue on as usual. The new era that I’m talking about is the Brian Michael Bendis era.

The longtime Marvel Comics writer is joining DC, and will be taking control of both headlining Superman titles. That means that both will be helmed by the same writer, which is a first for the modern age I think. It also means that the current creative teams are not he way out. Or at the very least, the writers are.

But don’t worry about being left in the lurch, story wise. Dan Jurgens’ Action Comics and Patrick Gleason and Peter J. Tomasi’s Superman runs are ending with these very books that we’re talking about here. And that means that their arcs will be wrapped up nicely. Or, hopefully anyway.

Here are the official rundowns from DC:

Pair of mini-docs released for The World’s End

Superman 1978 joins the One:12 Collective