Red Dead, Midnight Club and Bully are all ready for download. 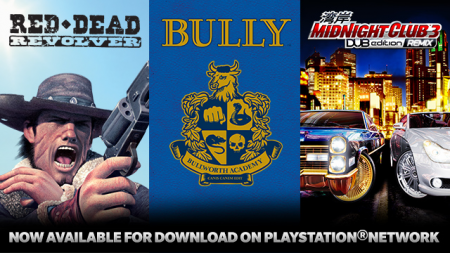 Set in the fictional New England town of Bullworth, Bully tells the tale of young Jimmy Hopkins as he experiences classic high school clichés and attempts to navigate through Bullworth Academy. Jimmy must work his way up the social ladder of this demented institution of supposed learning, standing up for what he thinks is right and taking on the liars, cheats and snobs who are the most popular members of the student body and faculty.

Tear through the living city sprawls of Detroit, San Diego, Atlanta and Tokyo at breakneck speeds. REMIXfeatures the entire original Midnight Club 3: DUB Edition game plus all the content included in the special Remix update – over 20 additional vehicles added to the original roster spanning all car classes.

The precursor to Red Dead Redemption, this third person shooter is a classic tale of vengeance and the story of Red Harlow – a bounty hunter prowling the untamed frontier and bringing justice to wicked bandits, while desperate to unravel the identity of his family’s killers. Many classic characters from the game, including Red, were featured as multiplayer avatars in Red Dead Redemption’s Legends & Killers Pack.

If you add in last week’s GTA: San Andreas posting, that’s one big load of Rockstar goodness up and downloadable for PlayStation gamers. All three PS2 classics are $9.99 and are available in North America right now and will be up in Europe and Asia “early tomorrow”.

Two for the kids, Garfield and Paddington hit the 3DS today