Looks like it’s all about to hit the fan in Secret Empire. The entirety of the Marvel Universe’s heroes will unite with one goal: Stop Hydra… and Steve Rodgers.

What if your greatest ally was secretly your greatest enemy? Beginning May 3rd, prepare for Marvel Comics’ SECRET EMPIRE! Blockbuster creators Nick Spencer, Steve McNiven, Andrea Sorrentino and Leinil Yu are ready to challenge the entire Marvel Universe as they unite the Avengers, X-Men, Defenders, Champions, Inhumans, Spider-Man, and more, as an unwavering front against the SECRET EMPIRE! 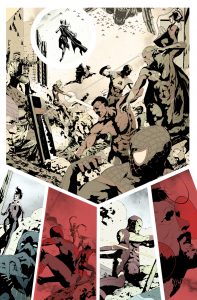 The Marvel Universe is under siege from within! Due to the manipulations of the Red Skull, Captain America, secretly a true believer in the cause of Hydra, uses the trust and respect he has gained over the years to a position where he can enacts Hydra’s ideals against the Marvel Universe and it’s up to all heroes to unite against one of the greatest challenges they have ever faced.

Marvel’s Editor-in-Chief Axel Alonso said, “SECRET EMPIRE is the rallying cry for all the heroes — Avengers, Guardians, Defenders, X-Men, Spider-Man, Deadpool – to put aside their differences and unify in the defense of the Marvel Universe.”

That unification is what will be needed to confront Steve Rogers since all the heroes close to Cap have been be influenced by him over the years. SVP and Executive Editor Tom Brevoort said, “Our heroes will be tested both physically and morally against one of the most trusted heroes of all time and that’s the aspect of this story our characters face and what forces them to come together.”

Forged together as one – the Avengers, the Champions, the Defenders, the Guardians of the Galaxy, the Inhumans, the X-Men, and more will be tested as Hydra’s grip tightens around the Marvel Universe and SECRET EMPIRE unleashes a horde of villains against those who have sworn to protect the innocent. Be here as SECRET EMPIRE launches this May from Nick Spencer, Steve McNiven and Marvel Comics.

Evil Cap on the loose

Well… I still don’t like the whole ‘evil Captain America’ thing. Cap if pretty easily one of my favorite Marvel characters, and this arc has seen him bend a knee to the very people that he’s been fighting throughout his history. Yeah, it’s shocking and I know Marvel loves that word, but I don’t dig it. I will add though, that’s it’s kind of strange to see Cap right there with the rest of the heroes in the splash image below. Could he be shaking off the Cosmic Cube’s influence?

History would say no, since Marvel has a tendency to make these kinds of things last for a while. They usually get the most out of this stuff before giving the fans a big moment, and returning the character to his/her iconic form. Still, could be that they’re changing up the formula. So I’m hoping.

‘ll tell you what I do like though, go back and have a peek at where the X-Men are mentioned in the pr text above. They’re positioned right after the Avengers, and a good two spots ahead of the Inhumans. 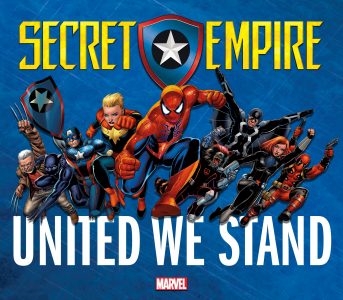 As a long time x-fan I love seeing that.

And even when Axel Alonso mentions the rosters of heroes that the event will offer, he’s got the X-Men in there, and doesn’t even mention the Inhumans. And it isn’t that I’m an Inhuman hater either, but the X-Men are some of my favorite characters of all time from any publisher, and to see them taking a big part in Secret Empire is more than alright with me. Add that to the bevy of new books that Marvel’s mutants will be getting in 2017, and I’m overjoyed.

Okay, off the soapbox. It takes a second since I have a few stacked on top of one another.

Secret Empire opens with the aptly named Secret Empire #1, which lands on the stands (and digital download storefronts) this coming May. It’ll be from the creative team of writer Nick Spencer and feature the art of Steve Mcnuven, so it’s probably going to be a good one. You know, if you’re into this kind of stuff.

Marvel and DC Vinimates, statues and more arrive from DST this week