The long-awaited, originally Kickstarted Agony is here. Its gory and over the top vision of hell is plenty unique, but there are some issues too. Okay, a lot of issues.

DISCLAIMER: Some readers may find disturbing imagery below and it is recommended only ages 18 and up read onwards. Viewer discretion is advised. 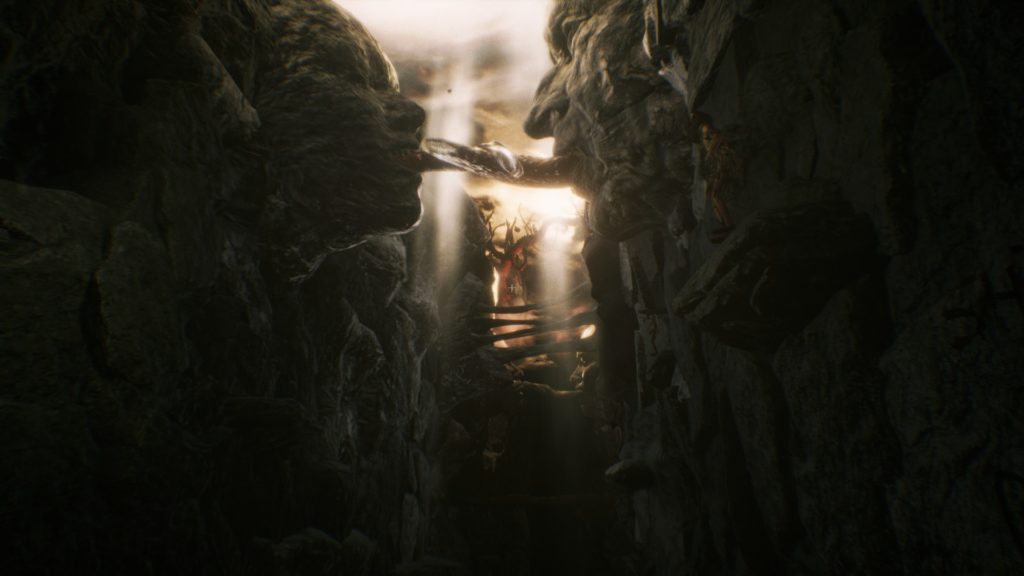 Agony is a first person puzzle game with a “Dante’s Inferno” aesthetic. It is a game full of gory, hellish, sexually explicit visuals and puzzles. I am impressed by some of the unique imagery and conceptual work that went into the game but also extremely disappointed by a lack of polish and confusing gameplay elements.

Portions of the game look really rough, even dated, and it shows in just about everything. This is a shame considering the other cooler more artistic parts of Agony. So let me ask… would you like to talk about our lord and savior, the Red Goddess? 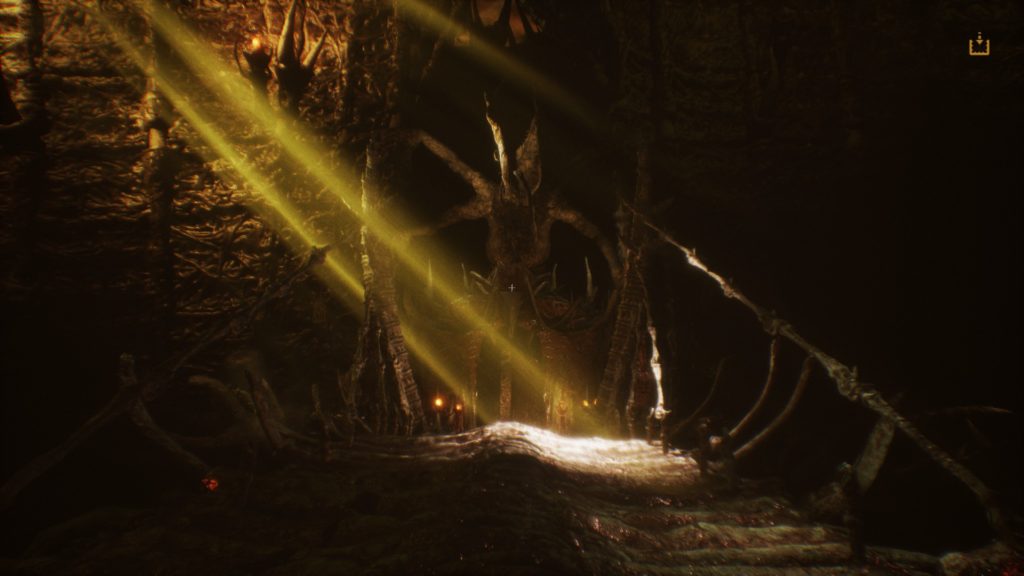 You are a sinner’s soul banished to Hell after what I can only presume is the day of Judgement from biblical times. Lucky for you, you can possess weak-willed humans when your flesh body dies. In order to possibly escape Hell you look for someone or something called the Red Goddess. This being seems to be the key out. Well, besides freeing four defeated Angels that can fight Hell once again.

The Red Goddess is also worshipped by the sinners around you and hints at her being involved with the humans on Earth. There are hints at a ritual as well, that took place on Earth to summon the Red Goddess and opened a portal to Hell which then consumed Earth or those involved in the ritual. 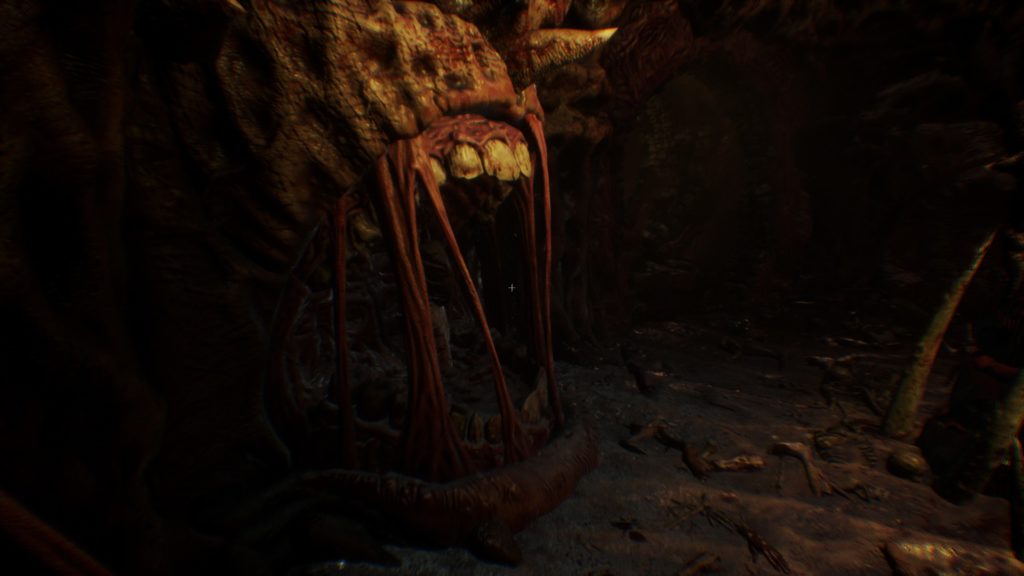 The plot is mostly told in an awful “journal entry” page-style. This would make sense in games where there are pens and paper but where in Hell do they find these things? It breaks immersion, especially since the pages even have a silly texture and scroll bars sometimes (hence a dated appearance). 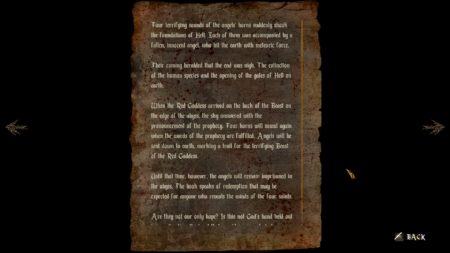 There are NPCs in Agony too, that can provide exposition, but most of them are repetitive. They have burlap bags (probably hints at execution but no other story element supports this) on their heads and say lines when you are near.

Then, once you take their bags off, they usually repeat what they were saying making the whole action a waste of time.

Thankfully there are NPCs with half a brain that are willing to offer narrative options – most of which are still useless.

One NPC at the beginning offers the most useful dialogue about your situation while the rest repeat crap about the Red Goddess or possible means of escape.

The Red Goddess also makes appearances as an illusion or possibly a passing memory, talking to the player or a lost sinner in view of the player.

She apparently just wants lost souls to entertain her and she torments them. That’s about it.

Agony is a somewhat typical first person puzzle game. You can traverse the world, jump, crouch, get hurt, pick up/throw objects required for puzzles and place them where needs be. There are awesome looking save points that you will return to in case of “real” death.

There are destructible wooden elements for when you pick up a torch to allow new paths to open too. The torch also attracts and scares certain demon types. One type is directly attracted and will kill you if she catches you – throwing the torch will make her head for it and inspect it before moving on. Another type is a multi-limbed lesser demon that initially runs away from the light.

The environment itself has some unique elements like paths that allow you to defy gravity. Throwing a torch when you are upside down actually makes it affected by gravity again. It’s pretty cool.

A really cool mechanic is the use of sigils. Sigils are symbols the player must memorize and draw with blood using their finger in the game. Some complete a pattern or are the specific sigil required to solve a puzzle. I really like this because it emphasizes the forbidden, occult atmosphere the game seemingly went for.

There are collectibles also, that encourage exploration and I really like the statues. There are golden statues of real life ancient fertility goddesses. They disintegrate into little pieces and a purple light when you pick them up. They also make a satisfying gong sound in-game. There are also collectible (and gameplay affecting) paintings that seemingly show the Red Goddess’s journey as a deity. The letters mentioned earlier are also collectibles. 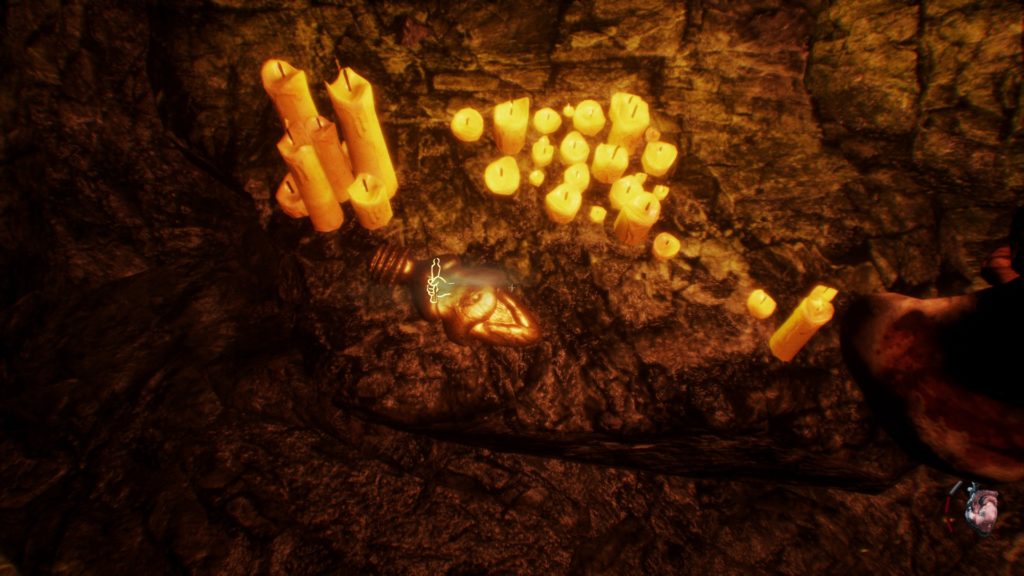 Torches and destructible environments are cool until you suddenly find yourself on fire after lighting a bush. You drop your torch when you get hurt so you have to pick it up again. I’ve walked over candles that have burnt me as well. It’s as if I’m setting off a small bomb and need to distance my character else I get the burn. It’s annoying and destroys my immersion.

The demon AI can get rather annoying. Normally in stealth games, enemies follow a set path and if distracted, will deviate from it before returning. The demons in this game are very interested in torches like “totes mah goats that light is fascinating bruh”. It feels like they hang around the light too long. In the end, I simply ran around rather than sneaking around since sneaking felt like it took too long and there was not much of a reward out of it.

The puzzle designs are hit and miss. The sigil puzzles were really cool. The pick-up-thing and put-it-here puzzles were not good. Sometimes they were confusing in terms of how events were triggered. Sometimes they weren’t necessary to progress in the game AT ALL. Since it’s not too clear what the reward is for finishing them, I skipped them when they seemed tedious. Sometimes by accident. This also leads to the death mechanic.

Dying sometimes lets you float around and try and possess someone before a timer is up – then you die die. Other times not, you just die and go back to the save point. It’s unpredictable at times as I experienced first-hand.

In a puzzle I was presented with a room where there are some possessable people. Surely you think “if I die here the game devs provided me some canon fodder to possess”. Wrong-ish. After summoning the demon in an optional puzzle, I promptly died because I cornered myself at the now suddenly closed entrance of the puzzle where I found a bug.

I had not only become a floater, but I was a stuck floater outside the puzzle room. I was in a perpetual Hell skybox complete with random black rectangles in the distance.

So I reloaded my last save point and tried again. Then I died died. I don’t get how one play through I get a second chance and the next just die. Since there was no obvious or even subtle way I was meant to kill this thing, I skipped it. This is tedious. Playing a game shouldn’t feel like a chore and the mechanics should be consistent.

Some graphical elements look great or fine then others are just plain awful! At least the lighting is good for the most part. The settings are good at times. 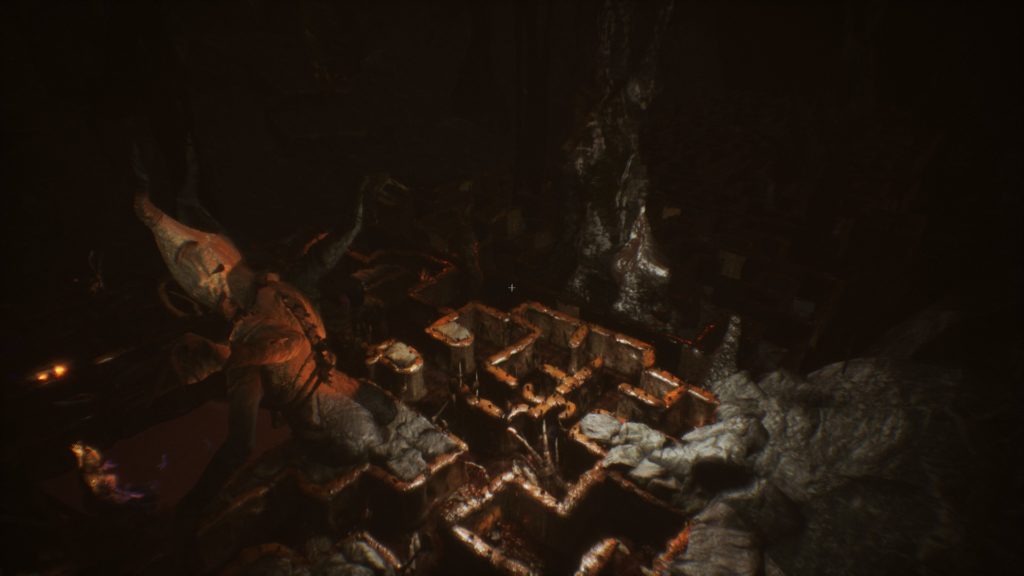 Sound effects are generally good such as the sound of the player walking on certain surfaces or the clopping of the demons hooves. There’s good location based audio. There’s good ambient music playing that sets the mood.

Then an NPC talks or the Red Goddess talks. God. The voice acting is terrible and sometimes the audio doesn’t match the subtitles. I mean look at this clip, this guys sounds JUST like Miss Piggy from The Muppets:

Ironically he also cuts himself off judging by the subtitles. One of the main recurring demons sounds like a husky smoker and it’s cringy! You can also hear the voice actor of the Red Goddess play some no-name demon gal or someone who sounds just like her. Voices are reused without even trying to sound different. But this is no MMORPG and it’s tacky.

The menus and HUD are so dated-looking. They look like they belong in the early 2000s in a Painkiller or similar game. Aside from that, prompts are ok and interaction icons are good.

Honestly, I can’t recommend a game so unfinished. There was a lot of wasted potential here for a convincing trip to hell. The conceptual settings makes me think a concept artist somewhere tried his best. Unfortunately this hodge-podge of poor execution makes the game look and act like some edgy, wannabe Satanist teenager. It’s unpredictable, temperamental, sometimes is a good boy, and sometimes draws a cool summoning circle once in awhile, thinks it’s cool and tries really hard but isn’t convincing anyone.

Copy Provided By Publisher For Review

Brutal Podcast 1: ReReVengence of the Technomancer