It’s a big book for a small hero as Ant-Man is making his debut in the world of crime fiction with a new novel from writer Jason Starr. 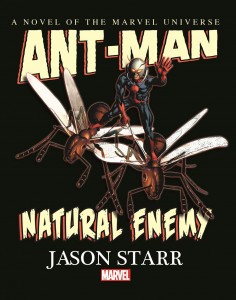 Just in time for his silver-screen debut, the Astonishing Ant-Man is making the leap to prose fiction! Prepare for Marvel’s smallest hero in his biggest story yet as he breaks new ground and charts new territory in ANT-MAN: NATURAL ENEMY – an all-new, full length prose novel! Debuting in 2015 from critically acclaimed crime writer Jason Starr (Twisted City, Wolverine MAX), ANT-MAN: NATURAL ENEMY brings all the action of Marvel Comics to the exciting new world of prose fiction!

Meet Scott Lang: ex con, single parent and part-time super hero. Settling in to a new city with his teenage daughter, Cassie, can be hard enough. Yet when a criminal from Scott’s past comes gunning for them, his new beginning is in serious jeopardy. But is the killer after Scott- or the secrets of the Ant-Man technology?

“Marvel’s exciting line of prose novels offer a completely new window into the Marvel Universe,” says Marvel SVP Sales & Marketing David Gabriel. “Whether you’re an Ant-Man fan, or looking to experience a new story featuring the breakout character of 2015, this novel is going to be an exciting thrill ride from cover to cover.”

Pushed to the brink, how far would Scott Lang go to protect his only child? Strap in as the Astonishing Ant-Man embarks on a twisted journey of desperation, secrets and adventure at a microscopic level in ANT-MAN: NATURAL ENEMY – coming in 2015!

So this is kind of interesting. Starr of course, is a crime fiction writer (who’s also well versed in the world of comic books) and not one that you’d expect to see writing a novel about a hero like Ant-Man. The character (all versions of him pretty much) has never really been associated with ‘crime’ per se, and more with super villains and the Avengers. I mean, when was the last time you read an Ant-Man story about him foiling a mugging? Natural Enemy should be a mashup to pay attention to though, if just for the fact that it really is something different, and not something I’ve seen in a while, as superhero novelizations haven’t really been out en force since the ’90s.

The book could be very interesting indeed, as Starr will add his own slant to the Scott Lange character (the current Ant-Man and one of the stars of the upcoming film of the same name), and it should prove to be a pretty unique take on him and his world. Generally, I like the idea of novelizations for superheroes, even though they’ve been out of fashion for a few years, as a writer can get much more in-depth in a character’s life in a regular old book over a comic book, where imagery tells half the story. Novels have detail and notes on characters that comics just flat-out couldn’t have after all, and that’s not a knock against comics, as the opposite is true as well.

Get two months of Marvel Unlimited for the cost of one