There’s a brand new X-Men team in the near future, as Marvel is bringing in a fresh squad of mutants for the book. Bu that’s not all, as you can also expect a new creative team to guide their adventures.

Astonishing has been a book that’s kind of slipped through the cracks in this X-Men revival at Marvel. X-Men Blue and Gold are both kind of considered the “main” titles in the line (Gold probably more than Blue), with Astonishing a distant third. That order might be about to change though, since Marvel is completely revamping the title. 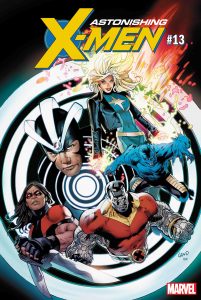 With Marvel-exclusive writer Matthew Rosenberg and artist Greg Land coming on to forge these new adventures, fans can expect a pretty big infusion of staple characters. Not that the older team was lite on famous faces, but this one is all X-Men mainstays.

In all, the book will star Beast, Dazzler, Colossus, and Warpath, with presumably Havok as team leader. Kind of cool too is that, unlike the more “punk” version of Dazzler that we saw promoted earlier this year, this version seems much more in line with her classic look.

Also, a statement from Rosenberg about the book is undoubtably tantalizing. And I mean that as to the impact that the Astonishing crew might have in the Marvel U.

“We’re taking a slightly different approach to our X-Men on this team,” Rosenberg teased to Marvel. “The reasons they are together and what their mission is means that they are playing a role in the Marvel Universe that the X-Men haven’t played in a while.”

The new year will be bringing Devastation! to the pages of X-Men