The BPRD team is spread to the ends of the world, some are dead, while others are missing. See how will they deal with the aftermath in B.P.R.D. HELL ON EARTH #147.

a continuation of BPRD: Cometh The Hour #2 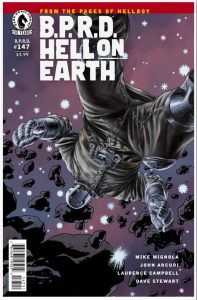 Issue 147 is one of tying up loose ends. Liz took off, feeling incredibly alone. Surrounded, with no end to the Ogdru Jahad on all sides. Miles away, Johann is continuing to work through his crisis of identity and ability. The voice behind boosting his confidence has been trying to tell him what he is capable of. However, what you can become is not always what you currently are.

“You still want to be the hero, you want to save them all.”

Johan has accepted what he is capable of, and seeks to have maximum effectiveness against such a numerous foe. Two months later, in an office in California, a fragment of Johan’s mask is sitting on a table in front of the BPRD. But what does this mean?

Two months have gone by, some of the threat has been addressed, while other things have gone dormant. But they remain ever-present. We still do not know where a number of the team are to be found. Some unusual faces still remain. Liz finds her way out to where the BPRD had evacuated animals to, for a much needed break. Time will tell though, if this is this a vacation, or if this is her way of hanging up the badge. The Cometh the Hour story arc comes to a close, but still leaves a number of questions hanging.

While things have calmed down, for now, we are left knowing that there is potential something more in the aether. “Will I ever…” could lead to so many things. I love how Mignola leaves us wondering what is next. Will the outstanding members of the BPRD return? Or is it time to reshuffle the deck of members? There’s always more going on then we are aware of, so I look forward to seeing where Mignola and Arcudi take us next.