Frank Gault arrives at the J Edgar Hoover building for a meeting, to find out that his associates have been treated rather roughly. Who could have caused this? Pick up Bankshot #1 to learn more. 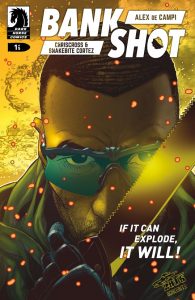 Frank appears to be one of your typical federal government agents. Dressed in a nice suit, feeling rather full of himself. Until he walks into a room of his superiors to see bloodied bandages, black eyes and more. He obviously missed something. What we learn, is that this is a result of some of Gault’s work. Frank ordered an operation on a Mr. Marcus King, claiming the man to be a terrorist. This was apparently a big mistake.

Meet Marcus. Marcus is 22 and is part of an unnamed military unit posted in an unnamed desert, keeping an eye out for a dictator. This sounds like the start of a great many movies, though it never seems to go as planned. Like many such setups, things get crazy quickly. Vehicles flipping, gunfire blazing, nothing could go wrong at a time like this, right?

King’s men are outnumbered and outgunned. Guys falling left and right, and artillery flying in from unexpected places. Just before he is executed, Marcus is met by a strange man that goes by ‘The Dutchman’. The Dutchman got Marcus out of the desert, though for what purpose we have yet to find out.

Cut to a future point in time, when Marcus is recognized as a quality fixer. He is living on an island so remote that it does not appear on GPS. A Russian intelligence agent appears seeking aid. Aid in taking down the Dutchman. These two are very set in their ways, and haggle over terms, until Marcus’ partner enters the room and settles the discussion quickly.

The Dutchman recruited Marcus to drive his truck. A simple task, that kept him from dying in the desert. Marcus even had the opportunity to take the Dutchman out. Looking back now, he realizes his mistake. Once Marcus got The Dutchman and his loot to their escape chopper, the Dutchman turned his men on Marcus. Telling Marcus to run for his freedom, Marcus is shot in the back.

Thus is the setup for Dark Horse Comics’ Bankshot series. Is Marcus a modern-day Robin Hood? Is he a terrorist? Maybe he’s somewhere in between. Pick up your copy of Bankshot #1 and decide for yourself.

De Campi and company have put together quite a gripping story of a marine turned mercenary. The mystery of the Dutchman compels the reader to stay tuned, wanting for more. The tagline of Robin Hood or Terrorist is appropriate, as we really don’t yet know enough about either character. Is Marcus good or evil? What is the truth of the Dutchman?