Warhammer 40k takes to the spaceways with the strategic Battlefleet Gothic: Armada.

We all have goals in our lives where we understand that that no matter how much practice we get in, or how much blood, sweat, and tears we expend, we’ll never get to that point. There are three undeniable facts like this that I have had to learn to cope with: I will never be as rich as Bill Gates, I will never be as smart as Albert Einstein, and I will never be any good at Real Time Strategy games. This is the experience I have had with Battlefleet Gothic: Armada.

First I want to make a note. I love the Warhammer 40k series. The video games (yes, the RTS ones), the novels, and of course, the big momma of them all, the tabletop games. As soon as this game reached the BG staff I rushed at the opportunity. My verdict? Keep reading…

The game is very well made, certainly a testament to the ability of the gentlemen and women at Tindalos games, whose other endeavors include Etherium, Stellar Impact, and Bunker Constructor; all three games, unfortunately, I have never played. 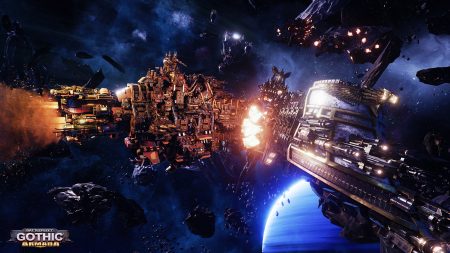 In the story mode of Battlefleet Gothic: Armada, players take on the role of an Admiral during the Gothic War; an important period in the lore of WH40K. As the Admiral, your goal is to guide your fleet into war against Abaddon the Despoiler, the leader of the Black Legion, and basically the biggest and meanest guy in the Chaos faction.

Story mode leads you through a long dynamic campaign that ebbs and weaves, and feels like a real war. Frankly the entire thing is fantastically done. A good example of the dynamic campaign is encapsulated in the first several hours of my time with Battlefleet Gothic, where I lost six battles in a row. As a result, I slowly watched the Gothic Sector fall into a state of Chaos (literally), and become overrun with brutish orcs.

As for the multiplayer; I came, I saw, I was conquered. Over and over again the process repeated itself. I would rush headlong into battle only the be massacred. A few times I got lucky, and was able to warp at least one of my ships out of there so the battle wasn’t a total loss… just mostly.

Well, eventually through searching “why do I suck so bad at Battlefleet Gothic: Armada” on Google, I found out that the game has a ton of hidden micromanagement commands. Some of these things were shown during the tutorial of the game, but definitely not enough to give anyone an edge in combat. 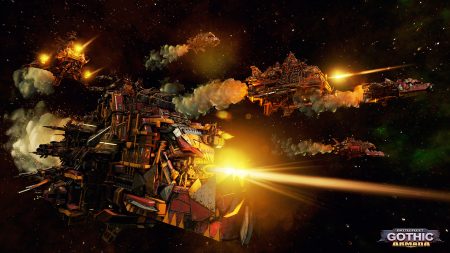 I can only assume some of these things weren’t shown off as much to let players feel some sense of discovery, but it brings up something of a pacing issue for the game, not only in the campagin (which will leave you crying yourself to sleep at night), but especially in the multiplayer matches. Couple that with the fact that some people’s ships have been customized to bring down structures that put the Death Star to shame, and it can really discourage someone from playing online… someone like me! So let’s move on.

The other two modes available to you are Custom Game (which plays exactly how it sounds), and Skirmish. Skirmish is definitely where I spent the majority of my time; quick games with random objectives, and a random battle point number, where you fight against a random faction. The matches are quick and violent, and seem to usually end in my demise.

At the beginning of a skirmish, you are allowed to pick one of the four factions. The Imperium, Chaos, the Orks, and the Eldar (more on those in a bit). After you pick your faction, you choose your fleet of ships and what upgrades you want to assign to each one, and then it’s on to the next screen, where you are given a set number of battle points, and then you decide (with those points) which ships should come into battle. 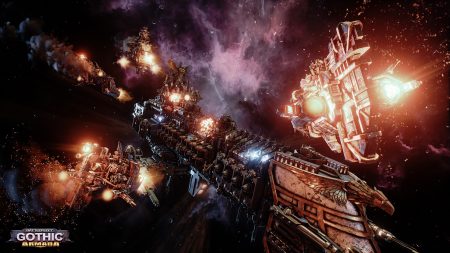 It’s an interesting mechanic, but it always has a way of making battles feel smaller than they should; Custom battles allow you to have up to 700 battle points, but I think a 1000 point battle would be much more fun and feel less restricted.

As I mentioned a moment ago, the game has four factions. The Imperium focuses more on their thicker armor and the fact that their ships can utilize more torpedoes than any of the other races, but their ships are slower and have a shorter gun range. Chaos fleets have longer ranges and faster ships with more launch bays (out of which launch smaller attack vessels than you don’t really control), but their armor is thin and they can’t use as many torpedoes as the Imperium. Ork Pirates are fun to play, they have the best defense and offense of the other factions, and every single ship in their library is customizable.

Then there are the Eldar…oh the Eldar; perhaps the most advanced race in the WH40K lore, and yet they have terrible defense, and most of their weapons on the front of their ships. They have the best small attack squads, and their ships are the fastest, but it doesn’t do much good when a few shots renders them destroyed. 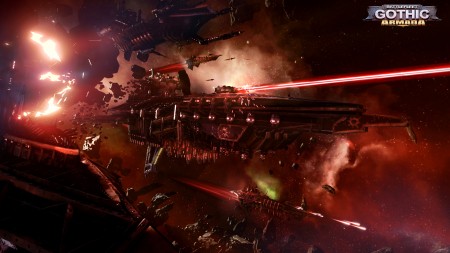 I think Battlefleet Gothic: Armada is definitely a good game. The story is interesting, the sound design is very good (despite a few repeating lines), and graphically the game is without a doubt appealing to the eye, but the harsh learning curve coupled with the bad pacing of the campaign mars what would otherwise be a perfect experience.

It’s true, I am absolute trash when it comes to RTS games, my forte definitely lies with Turn-Based Strategy games, but that doesn’t detract from my ability to understand what makes a Real Time Strategy game good… and this one is undeniably worth your time.