If you grew up in the 80’s, or are a fan of ridiculous comedy films, then you have heard of Bill & Ted. Brian Lynch continues their journey in Bill & Ted’s Most Triumphant Return.

Bill & Ted’s Most Triumphant Return takes place following their second film, Bill & Ted’s Bogus Journey, where they win the battle of the bands, and put everything right with the world, for now. 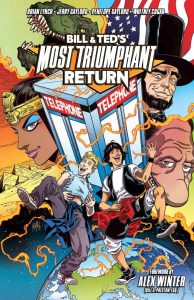 Now, in true Bill & Ted fashion, take that idea and flip it upside its head.

Bill and Ted are living on the excitement of having their girlfriends, and winning the battle of the bands. Someone asks about their second hit song, and the duo find themselves stumped. What will their second hit be? As their robot dopplegangers tend to rocking their babies back to sleep, Bill and Ted realize Station has been in the bathroom for far too long.

Come to find out, that upon entering the next room they find themselves in an entirely different time and place. They have landed in a future where high school education includes a course in ‘Bill & Ted 101’.

Be excellent to each other. Party On. Imagine finding yourself in a world where your slogans and ideas were not only on band posters, but on billboards, and even the foundation of the civilization. Statues of your likeness are popular decoration.

The world is your playground, and people hang on your every word. All except for one, Chuck DeNomolos. The teen that will one day grow up with the life mission to kill the legendary Bill and Ted, and ban anything associated with their personalities.

Ted comes up with the idea of helping Chuck DeNomolos improve his social situation, with the idea that DeNomolos will experience a better upbringing, and not be focused on killing the musical duo. Though what ends up happening is far more colorful.

Chuck DeNomolos took Ted and Bill’s leadership, learned not only how to play guitar, then he goes so much further. He learns how to play so well that he can replace the duo as the winner of their battle of the bands. Rewriting history, the future is a miserable place, where any resemblance of enjoyment is illegal.

Reality under DeNomolos is frightening, frankly. Smiling is outlawed. Partying is punishable. Entertainment is outlawed by Emperor DeNomolos. Today’s popular foods such as tacos and pizza are illegal. Even slang words from San Dimas’ vocabulary such as ‘dude’ are considered profane, while air guitar will get you arrested.Given the alteration of reality, several of Bill and Ted’s allies are no longer that either. Death has no clue who they are.

With the help of Rufus and one half of the alien Station, the duo are able to return things to the way they should be. The ending is even more righteous than the way this story began. And if that’s not enough, there are several short stories included. For those fans that just can’t get enough!

When I came across a Bill & Ted comic book, I (like most people) thought “there’s no way they could top the films.” I was mistaken. The air-guitar duo have outdone themselves, not without a bit of help from friends. And with a foreword by Bill S. Preston Esq. himself, Alex Winter, I knew it had to be worthwhile. The flavor was certainly different than what I have become used to. However I am glad I gave it a read. If ever you were a fan of the films, you owe it to yourselves to finish the saga!