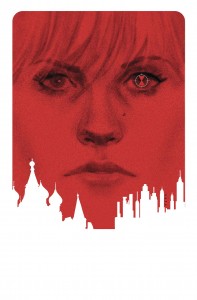 This January, Natasha fights off her demons in the new Black Widow #1, the action-packed new ongoing series from the blockbuster creative team of Nathan Edmondson and Phil Noto! You’ve seen her as an Avenger and even an Agent of S.H.I.E.L.D. – now prepare for a side of her you’ve never seen before!

Though she now walks a righteous path, Natasha’s past is paved with bloody memories. The death and destruction from her past as a KGB assassin still haunts her – and she now seeks atonement for past sins. Atonement that will take her to the darkest corners of the Marvel Universe and beyond. And commit acts the Avengers and S.H.I.E.L.D. would not approve of.

“Phil Noto and Nathan Edmondson have one those magical creative partnerships that brings out the best in both of them,” says series Editor Ellie Pyle. “Together they bring you a Natasha who is unsettlingly human in the midst of all the action and intrigue you’d expect.”

Deadly foes and lethal threats await around every turn – and the Black Widow stands alone. Don’t miss this new series that’s as gorgeous and dangerous as Natasha herself when Black Widow #1 is released this January!

Black Widow is one of those characters that’s been in the Marvel Universe and around the Avengers for what seems like forever. Even with a tenure that goes back to the 1960’s though, the character has never really been a ‘solo’ star at all. That’s probably a shame considering the sheer amount of really cool stuff that surrounds her and makes up the Widow’s past.

She’s a S.H.I.E.L.D. mainstay and a card-carrying member of the Avengers at present- and that’s not even the touching on the time she spent as a Defender or even a Thunderbolt. As the press release above talks up, Natasha was also a spy long before she was a superhero and that portion of her history alone would make for a very cool series. Fortunately, that’s what that new Black Widow book will focus on right from the jump.

And bringing that tale of mystery and backstabbing to audiences will be writer Nathan Edmondson and artist Phil Noto. Oh, and you want some awesome variant covers? How about alt versions by J. Scott Campbell, Milo Minara and Skottie Young? All these will sneak onto store shelves on January 8th, which is fast becoming a big day for Marvel fans.