I love Bloodshot. It’s like a combination of the Spawn graphic novels I’d read as a kid, with classic Marvel/DC hero stuff. As it hits it’s #25, it’s to be expected that not every issue is going to be amazing as the series goes on, and unfortunately Bloodshot #25 is one of those not-so-amazing ones. 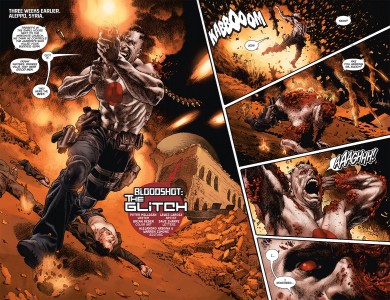 Bloodshot #25 is a mixed bag of Bloodshot stories and weird, silly pinup and golden/silver age style ‘funnies’. The Bloodshot stories are of varying quality; some are story-arc worthy, while some are poor filler that really doesn’t fit in with the rest of the stories in the book. The art is consistently beautiful throughout though, and Bloodshot is one of the most amazing comics to look at, issue after issue.

Bloodshot #25 has five stories. In order: Training Day, Bloodshot: The Glitch, Protocol, The Gang’s All Here, and Bloodshot: Heart of the Matter. 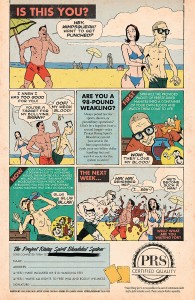 ‘Bloodshot: The Glitch‘ is an interesting take on the big “What If?” scenario that’s constantly played out in Bloodshot stories: what if he remembers who he is? The big crossover with the other Valiant properties from the earlier issues dealt with it, but this take on it is arguably even more impactful. While I think more attention should have been paid to the actual resoultion, it’s a very gripping story, and I found myself rereading it several times to really take in the gravity of the resolution. This is one that definitely doesn’t disappoint.

‘Protocol‘ is one of the more frustrating stories to read. The writing is all over the place, and the actual series of events is a touch confusing to follow. There’s no explanation for why Bloodshot suddenly becomes The Hulk, how he’s able to locate the call centre (a central part of the tale), why he decided to attack, or why a single sniper shot is enough to incapacitate him. It’s saving grace, however, is the 4-panel sniper shot sequence. A trio of cascading, inlaid panels, with the fourth being full page width and featuring some of the most mind-blowing art I’ve seen in Bloodshot yet (which is saying something).

‘The Gang’s All Here‘ is basically a filler story (as is Protocol and Training Day really), albeit an entertaining-if-slightly-cliche one. It’s the kind of sequence you’d expect to see as the opening if Bloodshot ever became a feature film (yes please!), but not something you want to see too often in a comic, as it doesn’t bring anything lasting or substantial to the character or overall story.

On the other hand, ‘Bloodshot: Heart of the Matter‘ has a lot of substance, and it could be a full fledged story arc. The first person narration from the non-powered character is compelling and brings a touch of reality to the craziness that superhero stories usually have.

Overall, Bloodshot #25 is a solid, if somewhat lackluster, read. Not everything is top notch here, but there is something for new and veteran readers of the series alike, and the art is amazing.

I did appreciate the ‘funnies’ style Bloodshot stuff too, like the pinups, cartoons, PSA’s, and fake mail-in offers throughout. While they deviate from the stories and art style with a swift kick to the temple, they’re actually really cool. It’s the kind of thing you’d expect from the comic equivalent of Double Fine’s Amnesia Fortnight game jam, and it only adds to the overall quality of Bloodshot #25.