Ray tracks down the copycat murderer who’s taken his former ‘Bloodshot’ guise, and discovers a few old friends waiting for him. 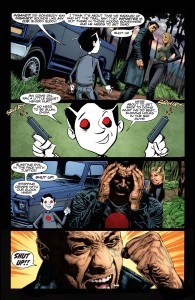 So far, we’ve seen Bloodshot (Ray) get his nanites pulled out of him, try and hold down a terrible job, start seeing illusions of the dead Geomancer and a little cartoon version of himself, and generally have a lousy time of being a ‘regular Joe’… well, as ‘regular’ as he can be anyway. It hasn’t been easy trying to adapt to a normal life, or what passes for one, but it gets a lot harder when he finds out that there’s a killer running around dressed as his former identity of Bloodshot.

In this issue, that comes to a head, sort of. Ray is on the hunt when issue #2 of Bloodshot Reborn begins, searching for some hardware and the bad guy in question. There’s a complication though, and it’s not his cartoony buddy. The nannies keep calling to him. See, the guy dressed as him is no cheap imitation and is actually loaded up with the tiny machines, and Ray can ‘hear’ them.

While that’s great in the sense that they’re leading him right to the killer, it’s not great in the sense that he’d really rather not have them back in his life in any  way. There’s little chance of that actually happening though, as this issue shows us that Bloodshot as we knew him might not be so dead and gone after all, since it seems like Ray has a definite link to the nanites. There’s a lot more about that end of things in this issue, but I don’t like to spoil, so I’ll just leave it at that. 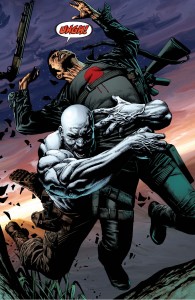 Needless to say though, if you’re a fan of the character, his remaining connection is a very good thing and makes for some excellent foreshadowing as to what’s to come. Things move rapidly in the issue and writer Jeff Lemire is doing a great job of writing a de-powered, but still pretty freaking dangerous, Bloodshot. There’s just something very cool about seeing the character, who was an unstoppable killing machine, cast as a man who is still getting used to being just that, all while hoping against hope that he doesn’t turn back into the monster that he was.

There’s also a secondary storyline that follows a pair of FBI agents as they hunt for the killer in question. This particular stream of narrative doesn’t come off as neat as the Bloodshot stuff, but has a definite charm. Actually, it kind of feels like a TV cop show. Depending on your view of that, your mileage may vary on your enjoyment. I kind of liked it though.

I also really dug the art by Mico Suayan, who’s doing a splendid job of grounding the whole story in a realistic grittiness that comes off perfectly. It should also be pointed out here that Lemire joins Suayan in the artistic duties on the book, and both work to present something that’s very cool overall. If you have yet to read it, BR does the whole Bloodsquirt dynamic really well. It’s such a serious story, but those parts with the little cartoon Bloodshot contrast so comically against the rest of the artwork, you could easily forget the heaviness here and there. To a point anyway.

So far, so great. Bloodshot is one of the most interesting characters in modern comics, with tons of likability that’s transferred surprisingly well into the current book and setting. I usually find that I have some kind of time period where I need to get used to major changes to characters, but that’s not so here. Maybe it’s because it’s established early on that there’s way more to this story, but I have to put most of it on what Lemire is doing with the character and his new supporting cast, in terms of the script.

Likewise Suayan’s art is nice and gritty, and gets plenty of emotion across in all the right ways. Especially well done is Ray himself, who appears shocked and emotionally wrecked quite a few times across the first two issues. That’s not something that fans are used to seeing from Bloodshot. It’s one of those big changes, but one that feels right on for where this book is headed.

Bottom line, Bloodshot Reborn #2 furthers the narrative in some excellent ways, moves like lightning with plenty of action and some great moments with Ray, as well as the two cops that are on the same case that he is. If you like action in any way, this is a comic that you should most definitely be checking out, and two issues in, I’m hooked all over again.

Bloodshot Reborn #6 launches into a new arc this September