Gilad’s insistance that the Geomancer isn’t behind the recent string of massacres in the US brings him head-to-head with his teammates on Unity in issue #2 of Book of Death. 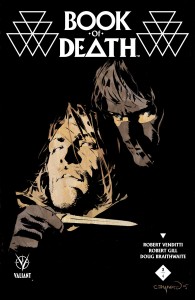 Convinced the unnatural disasters tearing our world apart are a direct result of the new Geomancer’s arrival, the combined forces of Unity – including X-O Manowar, Ninjak, Livewire, and GIN-GR – are about to confront the Eternal Warrior about the true nature of his powerful new charge! They’ve sworn to take him in by any means necessary…but, to prevent civilization from falling into a new Dark Age, the Eternal Warrior won’t go down without a fight! Can history’s most battle-hardened warrior convince his old comrades that peace can still be won? Or will war, blood, and fire consume the heroes of the Valiant Universe as they face the full fury of the Eternal Warrior unleashed for the very first time?

Yes, Book of Death #1 just released this week, but you can never get too much of Valiant’s big crossover books I say, so here we are with a preview of what’s to follow that cliffhanger ending. Now, obviously, if you haven’t read issue 1 yet, don’t scroll down and look at the preview images, because they’re loaded with spoilers for what arrived this week.

It does look like some good stuff though, as Gilad (the Eternal Warrior) is forced to take matters into his hands in order to defend the young Geomancer from the rage of an entire world and an evil presence, one that has control of the ‘rightful’ new Geomancer.

Don’t miss Book of Death #2 when it arrives join stores and on the digital waves from the team of Robert Venditti, Robert Gill, and Doug Braithwaite.

Marvel Comics lays out its Legacy in new event book