Dark Horse Comics return with the penultimate issue of Buffy The Vampire Slayer’s Season 10. Following the strongest season since the TV show ended, will fans get a bang or a whimper? 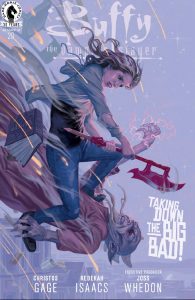 It is kind of hard to believe, but this version of Buffy the Vampire Slayer has been around for almost 20 years. If one were to take the comics as canon, which the numbered seasons are, then these characters have been evolving in front of our very eyes for nearly two decades.

Since the time span within the universe of the TV show is about 1:1, then it has to be assumed that Buffy and Co. are approaching 30 (at least) in the comics. The biggest challenge faced by the creators is to effectively transition these loveable heroes into maturity while maintaining the charm of their slightly adolescent style of dialogue. Wit, no matter how hilarious, should not be the same at age 15 and 30.

Yes, the bad guys are right there. Easily distinguished by their pointy horns or black hats.

Christos Cage’s script is as faced past and engaging as always but it does seem like there is no new ground left for the gang to thread. Even the title card, Taking Down the Big Bad, fails to hide that this merely another situation of finding someone for Buffy and Spike to hit.

With the Vampyr book in his grasp, Vengeance Demon D’Hoffyrn aims to remove the limitations that govern his boundless power (that humans must wish for something) and sets his sight on taking over the world. Accompanied by evil NOT Anya, a final large scale battle between the Scoobies and D’Hoffyrn has begun.

Huge ending aside, the plot (and the whole current arc) struggles to justify it’s existence all that much. Even interesting recent developments (like Dawn and Xander’s road trip through dimensions) did not amount to much more than filler. D’Hoffyrn, a storied character within the Buffyverse, is reduced to a Big Bad with only hints of depth.

Related Article:  Death gets a comicPremiseArtworkWritingOverall

Saying that, the climax does suggest that the status quo will NOT be returned too. This would not be the first time that a potential shake-up ends up being nothing more than a detour but, maybe, Season 11 will bring new beginnings.

Where the plot whimpers, the humor bangs. Cage’s script sparkles with a hilarious opening scene that left me smiling for all of its pages. The banter between the opposing armies does not fail to entertain, either, despite certain characters bluntly restating their character development for about the fourth time in as many issues. Angst tends to be heavy within the Buffyverse, but as long as it leads to actual maturity, I am more than willing to stick by it. 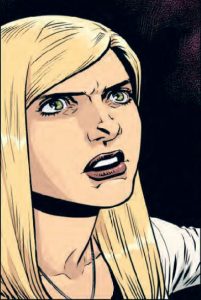 Rebekah Isaacs masterfully handles the art, again, for issue 29. At this point, the biggest compliment I can give her is that these drawings, in my mind, represent Buffy Summers and Co. as much as Sarah Michelle Gellar and the rest of the cast. Isaacs art might not be particularly flashy but she maintains a high quality throughout the issue. The attention to detail given to faces is also quite spectacular.

Related Article:  Shadow Man scares up a return to the PC 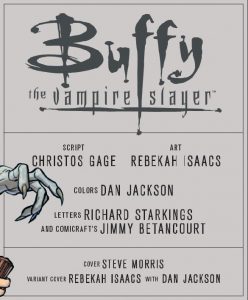