With 35 years of history already, one of the greatest fantasy comics of all time moves to Dark Horse. 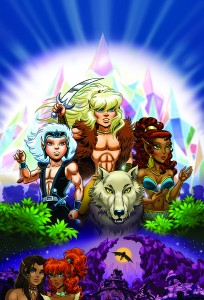 For generations, the Wolfriders sought a safe haven. Now, in the Palace of the High Ones, they have found it. But with security, the elves lose the skills that made them superb survivors in a harsh world. Elfquest: The Final Quest poses dire questions: Who stays? Who goes back to the forest? And what grim price will the Wolfriders pay?

And with that, Dark Horse Comics welcomes Elfquest: The Final Quest into its stable of books. The publisher announced the new collaboration at the C2E2 convention this morning and said they’ve been eying bringing Elfquest into their fold for a while. And by ‘a while’, I mean like, since the 80s.

“I’ve known Richard (Pini, co-creator of Elfquest) from our very first year and read Elfquest from its inception. I’ve also pursued him and Wendy for nearly as long as Dark Horse has existed. Elfquest has been a lifetime project for Wendy (Pini) and it is one of comics’ great epics. I am extremely proud to bring their wonderful book to Dark Horse and particularly excited to see what is in store for us over the next three years,” Dark Horse President Mike Richardson continued.

As for the Pini’s, the co-creators of Elfquest, they’ve nothing but respect for one of the biggest independent publishers in the comics industry.

“Dark Horse is a company I’ve admired ever since it sprang on the scene in the 1980s. Somehow, as large as they’ve grown, they’ve retained an independent spirit that Richard and I totally identify with. The quality of their offerings is legendary and I’m extremely happy that Elfquest is part of their lineup,” said Elfquest cocreator Wendy Pini.

“Mike Richardson and Dark Horse come from the same publishing DNA as our own company, Warp Graphics, and he retains that gut-deep love of getting comics out into the world. We’re jazzed at all the plans, both traditional and new, they have for Elfquest,” added Elfquest editor and cocreator Richard Pini.

If you’re an Elfquest fan, this is a very good day indeed. The last issue of the comic published by anyone was by DC Comics back in 2007, so fans who’ve been looking to read some new adventures featuring the Wolfriders and crew haven’t exactly had anything even close to an embarrassment of riches as of late.

Thankfully, fans won’t have all that much longer to wait to see Elfquest: The Final Quest on store shelves though, as Dark Horse’s debut of the beloved series is set to arrive this Fall.