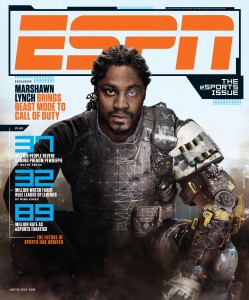 A huge video game fan, the Seattle Seahawk’s star running back is set to go to virtual war as he’ll have a role in Activision’s next CoD title. In an as yet unspecified role, Lynch recently showed up to Activision’s motion capture studios to get digitized. Of course, he also got some hands on time with the game, like any fan would have.

As you might imagine too, this little happening wasn’t exactly unnoticed by the sporting press, who normally wouldn’t really be mentioning Call of Duty too much. ESPN the Magazine will be running a cover image of Lynch, as he ‘morphs’ into his in-game character.

That same issue will also be the first ‘video game issue’ for ESPN’s mag, and will go heavy on esports for the month. Signs of the times, much to the chagrin of certain people no doubt.

In any event, you can grab that issue of ESPN the Magazine right now (it’s the June issue). You’ll have to wait just a touch longer to get your hands on a copy of Call of Duty: Black Ops 3 though, as the game doesn’t arrive on consoles and the PC till November 6th.

How to view your Call of Duty: Warzone Rebirth Island stats