I’m afraid that there’s no fair way I could review Carmageddon. I’ve talked to people who really enjoyed it, but my experience has been the exact opposite. So sit back, and just listen to my tale of woe. 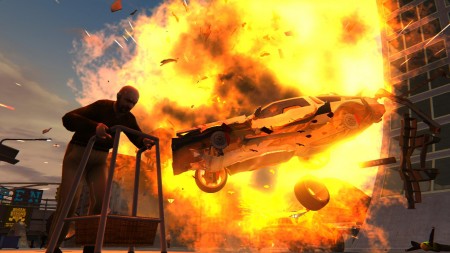 I tried, rather hard, to find some semblance of fun in Carmageddon: Reincarnation, and while it had its moments, they were few and far between. And I’m not joking when I say that the occasional moment of bada**ery is the only enjoyment I could find.

Beyond that, it was one of the least fun experiences I’ve had playing a game. One might think that a game where you go around driving recklessly, running over civilians, smashing into other cars, and making cool stunts would be a bit more than a tedious grind, and perhaps for other people it is. On paper, all of these things sound fun, but they just don’t work all that well.

Let’s start out with the camera, oh the camera. I’ve seen some pretty terrible cameras, mostly from the 3D Sonic games, but this one is a true contender. I flipped around with the settings for a while but never found an option that allowed any true control, when driving forward the camera stays glued immediately behind the car. 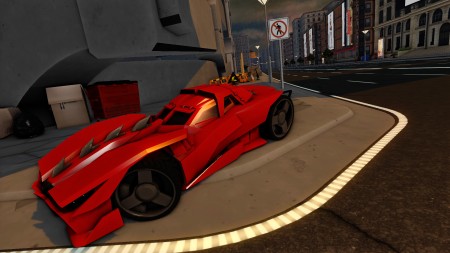 If you even so much as think about going in reverse, the camera swoops around (but not smoothly, mind you) and stares behind you. Let me tell you, I had the worst times trying to quickly reverse and turn myself around, and never once did I succeed before getting smished (that was originally a typo, but I’ll leave it because ‘smished’ just sounds so elegant) to bits by an oncoming enemy AI. Speaking of AI….

Related Article:  Batman to arrive on Wii U as launch title

They target you, and only you. Never was there a single time where I saw two enemy AI’s hit one another purposefully, meaning the only time I saw them make contact was when I was about to get sandwiched and managed to get out of the way. There’s no personality to any of the AI, none whatsoever, and you know what else there’s none of?

A story. The game (from what I could tell anyway) has no story. No, admittedly I didn’t expect there to be a compelling story by any means, but for goodness sake, at least drivers from Twisted Metal (a very similar, but actually good, game) had a back story. In Carmageddon, I couldn’t even find that.

I don’t really have a segue for this one so I’m just gonna say it: in a game which celebrates the maiming of people and animals so boisterously, they sure made it boring. When hit people either crumple in bloody piles of mush, split in two, or completely splatter in every which direction. This could have been awesome with the addition of a few more ‘splatter’ animations, but alas, after about the fourth or so person, the novelty wears off.

There are a few different game modes to play around with, for instance standard racing (with the inclusion of murder), deathmatch, and a few other less notable ones.

Something I did like was the music, after a bit it did get too grindy for my ears, but for a while it was one of the few things I enjoyed. 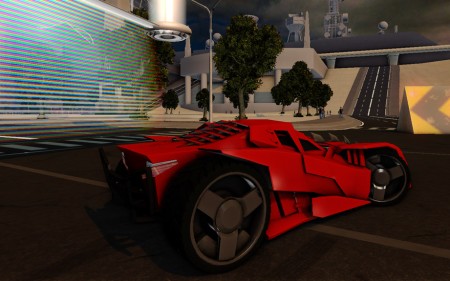 I also liked the large open maps, though I did find them hard to navigate with the crappy controls and camera, I do appreciate the effort put into the maps. In places, however, there were some really… geographically questionable areas, for instance at one point I found a hill which conveniently merged with a tower to make a sort of ramp.

Alright, back to the condemning. To bring to light the worst two parts of the game: the framerate, and the load times. Let me start with the framerate; for the first three hours I played, the game ran at a smooth 10-15 frames per second on medium graphics. On medium. One could say perhaps it was my computer, but I can run most games on high at a standard 50-60 fps, so I have doubts.

The load times are horrendous, easily a 5 minute load time on average and needless to say this is inexcusable. Hopefully this will get ironed out in a future update, but for some reason I don’t see that happening.

Upon looking back, there are some things that I liked about Carmageddon, and there were things that might not have been bad if the game had either more development time or a higher budget. I also want to point out on a very large note that upon starting up the game, each time, something had changed.

To clarify, the map key didn’t work the first time I played the game, there was no music the second time, the framerate was decent another time, but the camera didn’t move at all, even when going reverse. Now, it is possible that I simply got a bad download. It is also possible that the game is simply broken, but given the opinions I’m hearing from other people, I doubt that (side note: Yes, I did delete the game and re-install it, but nothing changed, and results were still different each time).

I got this game for review around the same time as the release of Mad Max in theaters, so I was very excited to play it. What I got wasn’t so much Mad Max, as it was Sad Max.

The Wolf Among Us: Episode 5 (PC) Review