The multimedia assault is here for DC’s newest animated film Justice League: Gods and Monsters, and it brings an alternate look at Superman with the Son of Zod in a debut issue that fans of the DC Animated properties shouldn’t miss. 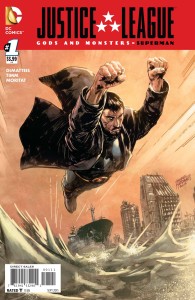 Probably my pick of the week is JLA Gods And Monsters: Superman #1. Starring the son of Zod and taking place in an alternate universe, this issue expands on the fiction created for the new Blu Ray and DVD film, Justice League: Gods and Monsters.

So what’s to get so excited about? Well, for starters this one’s done in the classic Animated style of the Batman, Superman, and Justice League cartoon shows. And to back that up, Paul Dini is in command of it. He was the creative force (among others) that drove those aforementioned cartoons, and if you like good superhero ‘toons, well, then you liked those shows. Personally, and as much as I do like the way things are looking so far, I think Dini should be put in charge of the DCU film slate. He knows his stuff, plain and simple.

Other than that though, there’s not a glut of books this week, but there is a ton of good stuff packed into what’s out there this week. Don’t miss the origins of the ‘Truth’ Superman storyline in Superman #42, the new issue of He-Man: Eternity War, Ghostbusters Get Real, Star Wars #7 and more.

Scroll down for my full list of picks, and then click on over to Previews website to see the entire roster of what’s out there at your local comics shop today.