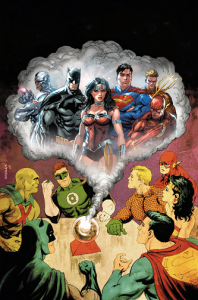 While out on a drive, Barry Allen investigates a strange blue glow coming from a house, and ends up encountering Jasonar and Saranna, beings from the dimension known as Kalanor. Changing into the Flash, Barry learns that these aliens come from another dimension which has been under the rule of Despero, a despotic ruler who has access to super weapons. Jasonar and Saranna had come to Earth to build a device which would absorb the weapons’ power source. Offering to help, the Flash calls the Justice League together for a meeting in order to help Jasonar and Saranna in their mission to stop Despero. Writer: Gardner Cox ; Penciler: Mike Sekowsky; Inker: Bernard Sachs.

Offered by Wizard World Inc., the March edition of ComicConBox will indeed come packed with that super-cool cover variation for JLA #1. It’s the 11th such box offered by the company, and the only one that’s comic book-centric as far as I know.

Related Article:  Spider-Man 2099 #1 lands back in the present next month

As for the cover, I know I’ve seen that image somewhere before, and I think it’s a riff on a pretty old Justice League cover… Wizard World doesn’t say it anywhere in the press release, but I can’t shake the feeling. In any event, it’s a cool image and comes from the talented mind of illustrator Tyler Kirkham.

If you’re a subscriber, then you can expect to see this arriving in your mailbox sometime around the first of the month. If not, then you might want to hit this link right here and sign up.

Fortnite subscriptions will offer greater value for players this December

Trailer: First-person mystery/puzzler Call of the Sea arrives next month