The Man Without Fear takes on The Legion of Monsters as he fights to shut down the deadly Sons of the Serpent. 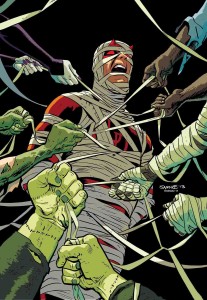 This November, Matt battles for survival against supernatural foes unlike any other in the terrifying Daredevil #33! From the award-winning creative team of Mark Waid and Chris Samnee comes one of the strangest Daredevil tales yet! The Man Without Fear’s quest to end the Sons of the Serpent organization has put him in the undead clutches of the ghastly Legion of Monsters! Now, Daredevil must battle against Zombies, Werewolves, Mummies, and even the Daughter of Satan! Not to mention the Sons of the Serpent themselves! With these frightening foes closing in, is it possible the Man Without Fear might just be afraid of something after all? Don’t miss th shocking Daredevil #33 for the answer!

Personally, I think I’d be afraid of all of that, so Id be more than happy to give Daredevil the benefit of a free pass on being a bit skittish around the Legion of Monsters.

Daredevil has been a very interesting title in the wake of the Marvel NOW! initiative and issue #33 is no different. Well, it’s a little different in that he’s taking it, bare knuckle-style, to a bunch of monsters- but you get my point.