The latest creator-owned series from Dark Horse stars the talents of Drew Edward Johnson in a tale of mystery and the supernatural. 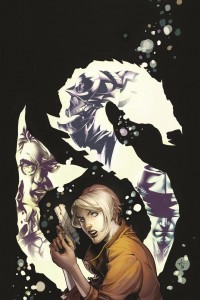 Forty years ago, England’s greatest adventurers cast aside their friendship, making a choice that would come to haunt humanity. Now, secret agent Matilda Finn will face the consequences of that choice as she aids in a frantic rescue operation at Scotland’s Loch Ness, where something terrible is waiting to draw her into the fight of her life!

“I began my career in comics working with Dark Horse on Star Wars: X-Wing Rogue Squadron,” Johnson told Comics Bulletin. “To bring my first creator-owned project to Dark Horse Comics is a great homecoming for me. Especially given the opportunity to work with my editor, Philip Simon, whom I had the good fortune of working with in the early days of my career. I’m thrilled and honored to join Dark Horse’s line of genre-bending horror-adventure books, like Hellboy, B.P.R.D., The Goon, and so many more, which have all influenced my work heavily over the years.”

If you’re going to be influenced, those are the books to do it. The Hellboy line and The Goon are some of the most consistently well made horror/suspense books on the market and have been for a good long time. For Johnson to cite them as some of the inspiration behind Midnight Society: The Black Lake is a very good thing indeed.

The creator has quite the pedigree too, as he most recently worked on DC’s excellent Wonder Woman book and helped bring that character back up to the level of one of the publisher’s biggest heroes. Here he’ll obviously be taking a different tone, less superhero and more spooky, but the man knows what he’s doing is what I’m saying.

If you’d like to read up on Midnight Society a bit more, click on over to Comics Bulletin here.