Jeff Lemire and Dean Ormston’s homage to classic comics has made an impact in its short time. Get ready, because there’s plenty more Black Hammer on the way.

“One thing Black Hammer has always done is comment on the history of superhero comics and we live in a world where superhero universes seem to be rebooted, relaunched, and rebirthed every year,” said Lemire. “It felt like we needed to play around with that idea, but put a Black Hammer spin on it. So, starting in April, Dean, Dave Stewart, Todd Klein, and I will continue the story and the mystery of Black Hammer farm in Black Hammer: Age of Doom! It’s a new series, but everything you love will stay intact and we’ll deliver the next chapter in the story of Golden Gail, Abraham Slam, Barbalien and the rest of the gang.”

“Black Hammer ends with a major, game changing revelation,” said Ormston. “Readers are super keen to find out how our heroes are stuck on the farm and more answers, twists and turns are coming in Black Hammer: Age of Doom.” 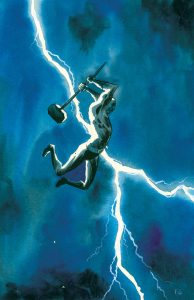 “Black Hammer has grown beyond what Dean Ormston and I could ever have hoped for,” said Lemire. “We’ve fallen in love with the world of Black Hammer and the characters that live there and we have a lot of story left to tell. This ending is just the beginning.”

The Age of Doom

So what is Age of Doom? Well we don’t really know as of yet. It’s more of the Black Hammer universe though. And that’s probably enough to get fans going.

Those fans won’t have to wait till 2018 to read more though. Also on the way is a series of mini’s. Right around the corner, on October 18th, the first of those are set to hit stores. Sherlock Frankenstein & The Legion of Evil will be written by Lemire, but feature art from Dave Rubin.

It’s not indicative of a shakeup for the main book, Age of Doom. Instead, this is a brand new initiative to give these characters some different looks. All of the upcoming miniseries’ will offer separate artists. So anyone looking forward to more of Ormston’s work shouldn’t be worried. There’s plenty more on the way in next year’s Age of Doom.

But as for Sherlock Frankenstein & The Legion of Evil, it’s sounding pretty great.

The highly anticipated four issue series follows Lucy Weber—the daughter of the Black Hammer and an investigative reporter for the Global Planet—as she uncovers the dark secret origins of some of her father’s greatest foes. Sherlock Frankenstein & The Legion of Evil is the first of several high profile Black Hammer mini-series, all of which will feature different artists.

THE POWER OF MUSIC: VIDEO GAME SOUNDTRACKS AND BLACK HALO INTERVIEW WITH MIKE AND CHARLOTTE TRUMAN OF UK BAND HYBRID