The World’s Finest are back in action. DC Comics has announced that their iconic duo will be partnering up yet again with a new Batman/Superman.

Spinning right out of the Batman Who Laughs mini-series (which has just been expanded to 7 issues) comes Batman/Superman. A rebirth of the early 2000’s series from DC, the new comic is set to kick things off with the Secret Six.

To launch the new DC series, the first arc of BATMAN/SUPERMAN will follow the two titular heroes as they hunt down six infected heroes in the DCU—people revealed to be infected by the Batman Who Laughs with a deadly pathogen that violently transforms them into the evilest versions of themselves. The Dark Knight and the Man of Steel must journey into the depths of Gotham City to learn which of their fellow heroes has been transformed into the horrifying horseman of their most dangerous and deranged foe ever.

Joshua Williamson will be taking up the writing chores for the new series, with David Marquez taking on the pencils. Both are veterans, and should provide a great start for the new title. If the cover art (above) is anything to go by, it’s definitely going to look good.

Expect to see issue #1 of Batman/Superman on the racks come August 14th. 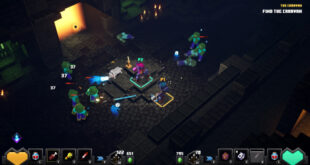 What is this, Valentine’s? No, Nintendo is referring to Minecraft Dungeons with the title of …

SDCC 2018: Image Comics announces slate of exclusives for the Con