Literature and Deadpool? Sounds like a match made in… well, somewhere. 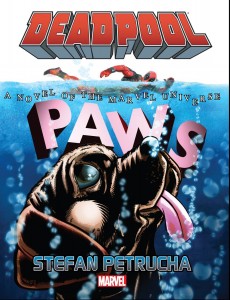 Sure, he’s got his own comic series. Sure, he’s one of the world’s most popular super heroes. But you know what he’s not? Fine literature. Well, let’s fix that! That’s right: In 2015, the Merc With a Mouth is conquering the world of prose fiction withDEADPOOL: PAWS, an all-new original story penned by novelist and comic-book writer Stefan Petrucha (Teen, Inc., X-Files).

Something is turning the city’s dogs into giant, bloodthirsty killing machines. And Deadpool is charged with taking care of business. Only thing is – Deadpool likes dogs. He doesn’t want to kill them. Now, people – that’s a different story. He can kill loads of people. At least the ones who deserve it. So what we’ve got here is a genuine character dilemma.

“Deadpool is such a fun character that transcends the comics themselves,” says Marvel SVP Sales & Marketing David Gabriel. “When we were discussing which characters should get the prose treatment, Wade Wilson was always right near the top. From the first chapter, the book has everything you love about Deadpool, and I can’t wait for fans to get their hands on it.”

In 2015, be there when the Merc With a Mouth conquers the brave new world of prose.DEADPOOL: PAWS brings you a disturbing tale of mutated canines…and the regenerating, loudmouthed mercenaries who love them.

Well, it certainly sounds like a Deadpool story, that’s for sure. And I’m sure with Stefan Petrucha involved, who’s actually a pretty accomplished comic writer, it’ll have all the hallmarks of the off-the-wall character as well. Actually, it should be pretty interesting to see how Petrucha handles old Wade since he’s more accustomed to penning tales about more serious characters.

Not that Deadpool isn’t serious. Because he is. Serious. …ly insane. And it should be a real crisis for him deciding if he’ll have to put down the mutant monsters that roam NYCs streets or, you know, just go and find some humans to beat up on. My cash is on the latter.

Wade works through his Original Sin in Deadpool #29