Looking forward to Homefront: The Revolution? Then you might be interested in the Goliath Edition, which includes an R/C drone car. 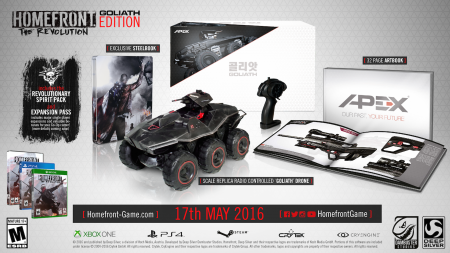 Special editions of games have long included no end of extras and goodies related to the games that come packed within, but in recent years it’s gotten bumped up to a whole new level. We’ve seen night vision goggles and even refrigerators as bonus items, but I don’t think a remote controlled car has even made an appearance. Well, till now anyway.

Homefront: The Revolution – Goliath Edition includes just that, a replica of the Goliath drone car that is used in the game. The little drivable isn’t the only thing that you’ll be getting with the Special Edition though; here’s what else is in the box:

All post-release content for Homefront’s co-operative Resistance Mode including new Missions, challenges, features and additional items and equipment will be delivered to fans for free as part of Dambuster Studios’ commitment to supporting this mode for 12 months.

And if you’re considering buying into the Goliath Edition (or any other edition of Homefront really), then you might want to pre-order yourself a copy. Publisher Deep Silver has announced a few bonuses today as well, which you’ll get by buying in before launch.

Here’s what you can get, and where you can get it. Homefront: The Revolution launches on the Xbox One, PS4, and the PC on May 17th in the US, and on the 20th everywhere else.

Pre-Order Homefront: The Revolution from any retailer to secure the Revolutionary Spirit pack, which includes:

All Digital pre-orders come with the Liberty Pack, featuring two pieces of rare combat gear unlocked and ready to personalize your Co-Op character with the Liberty Body Armour and KPA Shock Trooper Helmet.

Related Article:  No booth for Activision at 2016’s E3