Valiant’s newest character is pretty much a god. How do you think the publisher’s roster is goign to feel about that? 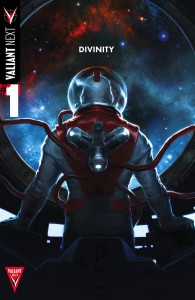 At the height of the Cold War, the Soviet Union – determined to win the Space Race at any cost – green lit a dangerously advanced mission. They sent a man farther into the cosmos than anyone has gone before or since. Lost in the stars, he encountered something unknown. Something that…changed him. Long thought lost and erased from the history books, he has suddenly returned, crash-landing in the Australian Outback. The few that have been able to reach him believe him to be a deity – one who turned the scorched desert into a lush oasis. They say he can bend matter, space, and even time to his will. Now the rest of the world’s powers must decide for themselves – will the enigmatic DIVINITY offer his hand in friendship or will Earth’s heroes find themselves helpless against the wrath of the divine?

Find out on February 11th as DIVINITY #1 (of 4) presents the coming of the being that will reshape the Valiant Universe! From the minds of all-star creators Matt Kindt and Trevor Hairsine, discover why Valiant is the premier storytelling company in comics today with all-new vision of 21st century science fiction unlike anything else on the shelf, only in DIVINITY #1 (of 4) – featuring covers by Jelena Kevic-Djurdjevic (Thor), Tom Muller (Zero), Trevor Hairsine (Captain America), and Lewis LaRosa (BLOODSHOT).

Valiant does a back with new series launches don’t they? Here we have Divinity, a book about a man who becomes basically a god. That alone is genre-breaking as it goes well past the usual superhero and villain conventions of the genre. Then add in some heavy sci-fi elements that would make Stanley Kubrick proud and, of course, that this ‘god’ is a communist from the time of the Cold War, and you’ve got a recipe for a a winner of a book that bears checking out by fans of any of the above.

I’m getting some serious Dr. Manhattan vibes off this one, and that’s a very good thing indeed. Grab Divinity #1 from the team of Matt Kindt and Trevor Hairsine (that’s not hurting its chances either) on February 11th. Already I can’t wait to see what a meeting between this guy and X-O Manowar would look like.

Coming soon from DST- one big pile of awesome

Harbinger Wars to shake the Valiant U in April

Valiant bringing it for Heroescon this weekend