Soon to be movie star (maybe) Dr. Strange focuses his Eye of Agamotto on the Incursions in the first of the new series of New Avengers Annuals. 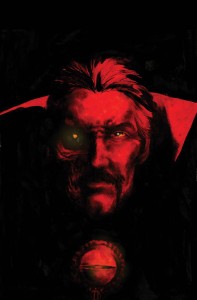 The Incursions are not the only horrors threatening to end the world as we know it. There are darker, more ancient forces at work. Forces more powerful than Stephen Strange could possibly imagine. Now, stretched beyond his limits, Doctor Strange and an enclave of techno-monks high in the Himalayas must stand against the coming darkness. Though even together they may not be enough – and a bid for more power could cost Doctor Strange everything. No fan can afford to miss a Doctor Strange tale for the ages when the oversized NEW AVENGERS ANNUAL #1 hits comic shops and digital devices this June!

Well here’s something we haven’t seen in a while- a Doc Strange story! And a big one too with the good doctor of all things mysterious and occult taking on a world ending (aren’t they all?) plot and some otherworldly nasties. Years ago, Dr. Strange was a staple of the Marvel Comics lineup, but he’s been relatively out of commission for some time.

I can’t say I was ever really a fan of the character, but there are plenty of folks that are and (even for me) it’s just plain cool to see him starring in an Annual like this and a big story to tell. Although, now that I think about it, its probably not all that surprising to see since there are some serious signs that Stephen Strange will be one of the lesser known Marvel heroes taking part in the ‘phase 3’ (how many phases are there gonna be anyway?) section of the Marvel Cinematic Universe.

The way the publisher has revived Guardians of the Galaxy with a movie and new book to go right along with it should definitely give Strange fans some hope for the same treatment and a permanent monthly for the character as we start to ramp things up into that third phase of Marvel’s plans for cineplex domination. As for New Avengers Annual #1, you’ll be able to grab a copy of that book when it arrives from the creative team of Frank J. Barbiere and Marco Rudy on June 25th.