Dragon Age: Deception starts Nunzio DeFilippis and Christina Weir’s tale in the Dragon Age universe, starring Olivia Pryde, a professional con artist. Her latest in a presumed long string of ploys has brought her to the Tevinter city of Ventus, which is on the brink of being attacked by Qunari.

The city is desperate to leave before they come. Art of the streets suggests everyone is on the run, but shots of the tavern in which much of the story takes place show a people who appear none too concerned with the rumors.

It is here that the first issue of Deception is focused. Olivia is seeking the son of a magister who’s reportedly practicing dark magic. What she hopes to gain from this son is not made clear (we can only presume money, then), and complications arise when her mark turns out to be running a con of his own, and is not who he seems to be. Her interplay with this fellow con artist is enjoyable (if a bit repetitive- by the end of the chapter, he’s suggested they team up four times), but their need to prove themselves to each other takes the entire issue. Olivia Pryde’s con act is convincing, but her goals in the city are not clear, which makes it difficult to feel any concern about her success. 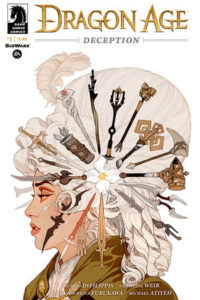 Dragon Age: Deception features the odd drop to remind you that this is the world from the games, including name drops and even the appearance of Dorian (of Dragon Age: Inquisition fame). They’re mostly distracting, but do what they can to service the setting.

The ending of the issue, and the threat of the Qunari (currently just an idea, rather than an actual threat), provides enough to sow interest in what’s going to happen next. I can only hope Olivia, and the writers, takes the role in her own story seriously.

The art of Fernando Heinz Furukawa sells the period with earthly tones, indoors and out. They tend towards the warmer while in Ventus itself, while the sparse Qunari appearances err cooler, helping their danger stand out, even if they do very little to threaten the town or characters directly. The characters’ expressions are all emotive and keenly display their different personalities. As so much of the chapter is focused in a single tavern and its surrounding streets, Furukawa doesn’t get opportunity enough to explore different scenery, but he provides constantly engaging shots that show us every angle of the locale. It should also be mentioned that Sachin Teng does draw a beautiful cover for the first issue of Deception.

The con-artist frame is intriguing enough on its own that Olivia Pryde could have been separated from the Dragon Age universe and it still would have been worth reading through. However, it’s a happy thing that it is in a world of Mabari, Qunari, and magisters. If the next two issues can explore Olivia Pryde’s personal motivations and show us who she is behind the con, and maintain the wit of the first issue’s battle of the grifters, then we should be in for a fun ride.

See you in Valhalla