The heroes in a half-shell are back in a big way and Diamond Select Toys has a mass of new figures and more based on them on the way.

“The Teenage Mutant Ninja Turtles are one of those brands that any company would love to work on,” says Diamond Select Toys president Chuck Terceira. “Not just because it’s so popular today, but because it’s such a long-lived property, with distinctly different incarnations of the Turtles and their colorful supporting characters stretching back to the late 1980s. Plus, it’s just a heck of a lot of fun. They’re turtles who fight ninjas, robots, and talking brains. What’s not to love?”

It really is kind of amazing that the Teenage Mutant Ninja Turtles have made such a dramatic comeback. It was only a few years ago that their last animated series hit a wall and faded into obscurity. Here with this newest incarnation though, which switches up the lore a bit (and to great effect), the green teens are back in a big way and making an impact for new fans as well as former followers who can’t get enough of the show.

Taking full advantage and scheduled to start hitting stores this Fall, DST’s lineup of Ninja Turtles stuff is just about as varied as you might imagine it being from them. There’s a little something for every fan of the fab four including Minimates (which are amazing), banks, bottle openers, and yes – a pizza cutter. Scroll down for the full descriptions and some shots of the goods.

Most of this stuff will start arriving into stores this September, but there are no firm release dates as of yet. 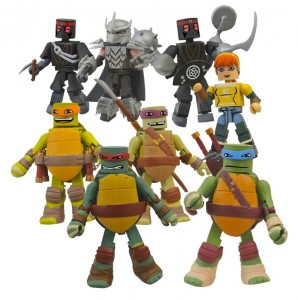