Many of us remember the story of Edward Scissorhands–the man who was perceived as strange and different but had a gentle heart. His story resonated with us in one way or another and has become a beloved classic. 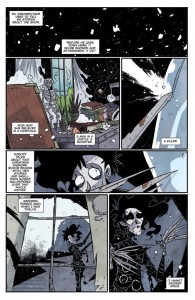 In this continuation of the story we are introduced to Kim Boggs’ teenage granddaughter Megs, who has been told that the stories she heard about Edward Scissorhands as a child are nothing but a legend. Megs is guided by her unwavering curiosity, and begins to find out if the stories are true.

Meanwhile, Edward Scissorhands is still alive and resides in the castle on the hill.  Edward has also begun to explore parts of the castle that we didn’t see in the film, and during his exploration he comes across a prototype that he names Eli. Not much is known about this new character at this time, except that he bears a striking resemblance to how Edward once was.

Remnants of the past are pretty much non-existent in this sleepy town, but with Megs one step closer to the truth you can be sure that all will be revealed in time. 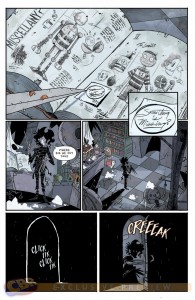 This first issue serves as a introductory piece to a whole new adventure, but writer Kate Leth does a wonderful job in giving insight as to what happened years after the original film ended. The characters at this point have little development but are beginning to show parts of their personality. Edward is still gentle yet awkward, and Megs is your typical teenager.

Artist Drew Rausch captivates readers with his cartoony, colorful, and whimsical illustrations that bring the storytelling to life and makes it much more enjoyable.

These series of comics are a delightful addition to the classic story, and should not be missed by fans who have always wondered the million dollar question: What happens next?