Epic Mickey The Power of Two hopes to lay to rest the niggles that plagued the good, but flawed, Nintendo Wii title. Have Warren Spectre and his team at Junction Point done enough to give us the Mickey Mouse game we’ve been waiting for since Castle of illusion?

When the original epic Mickey was released on the Wii it was praised for its darker take on the Disney universe and the unique mechanics at play. The innovative paint & thinner mechanic was much applauded, as were the fine animations and music. The biggest downfall was the poorly implemented camera, underwhelming platforming and general monotony of the later game. Two years later and the team are back, leaving the Wii exclusive label behind and coming to all major platforms.

Epic Mickey The Power of Two returns our global icon to the Cartoon Wasteland – the world he helped save in the first game full of reject inhabitants from Disney projects over the years. This twisted and dark vision of the Disney world was one of the defining factors of the first outing and it appears to have made it through to the sequel relatively unscathed – although that’s no surprise as a large portion of the first games environments are just reworked for the sequel.

Drawn back to the Wasteland by new best chum Oswald the Lucky Rabbi, the original titles Antagonist, you are tasked with discovering the source of the earthquakes rocking the world. Working together (hence The Power of Two moniker) they must travel the world with the help of their friends.

Right out of the gate you can tell that Junction Point have attempted to tweak that wild camera. Although it’s a lot tamer than the last outing it still gets itself in some terrible positions – this is disappointing that such a high profile title fails to achieve something 800point/£7 online titles are nailing with apparent ease.

Camera aside though the game has made the transition to the more powerful hardware well. The game could never be described as gorgeous but it has it’s moments and the bright colourful world is enriched by the colourful characters with in it. Shame that, from a collaboration with Disney of all people, the animation was not up to a higher standard. In fact it’s rougher in places than the scaled down Wii version from 2 years past. Still Disney fans will be delighted in the characters on display and the whole world does have a tangible Disney vibe to it.

The unique and compelling paint & thinner mechanic returns once more. Here you have the choice of either splashing a stream of pain on enemies of objects in the game to make things better or dousing them in pain thinner to destroy and take, in many cases, the easier path. The game makes a large deal of the fact that these separate paths will reflect in the world around you, including interactions with characters but in practise it makes little sense than to take the path that causes you least resistance.

Music in the game is mediocre at times with the odd flash of Disney magic along the way. The numerous musical numbers in cut scenes are painful at the best of times and lack any real zing or Disney magic. The same can be said of the voice work that appears workman-like at best with the odd gem thrown in. The delivery is fine, it’s just the lack of conviction or compelling subject matter that wears it down.

Related Article:  Under: Depths of Fear review — Trial and terror

Epic Mickey: Power of Two gives you the option to control Mickey or, if a second player joins, Oswald. Mickey’s array of moves are basically the same as the last game and feel a little under appreciated. Oswald brings new mechanics with his zapper and other toys but neither ever feel fully fleshed out. 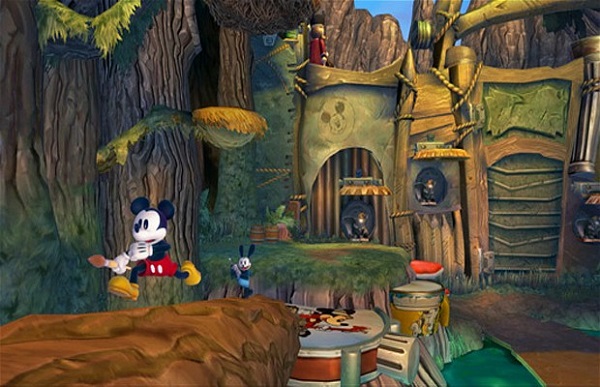 With two human players at the controls the game feels reasonably slick and offers a reasonable co-op experience. All be it a little last generation. In single player though you will find waiting for Oswald to perform a task frustrating at times and other times just outright maddening. When it all works in harmony the single player experience is more than fine, offering a much lengthier challenge than it’s predecessor did.

The main issue is that the game is just not the inspiring to play. Platforming feels too loose and imprecise. The glide mechanic, where Mickey grabs on Oswald’s feet and floats over gaps, is so hit and miss it’s laughable at times. There are plenty of collectibles around the world (pins etc) but you’ll just not feel compelled to go looking for them as the level design is so uneven.  Control of the painting mechanic is also a little cumbersome with the right analogue stick.  Many a time you’ll be wrestling with the controller to line up a better shot.  Throw on a Move controller though and the game becomes a lot more intuitive as the underlying design based around a motion controller shines through.  With the Move be so much more precise than the Wiimote it’s a better fit on the PS3 than any other platform.

There are points of merit though. The multi-part puzzles offer a good distraction (when the AI is playing nice) and the additional abilities, like conjuring up a TV set, all add to the layers of gameplay. There are also a reasonable number of side quests too that will keep you going probably longer than you’ll want to stay.

Epic Mickey The Power of Two does have less technical flaws than the last release. It just seems to have missed an opportunity to tweak the little things that would have made the difference. A bit more tweaking on the platforming, or partner AI could have put this game up from an average licensed game to something essential.  All to often you can clip through objects or just bounce of level geometry.  It just feels like it needed much more polish. 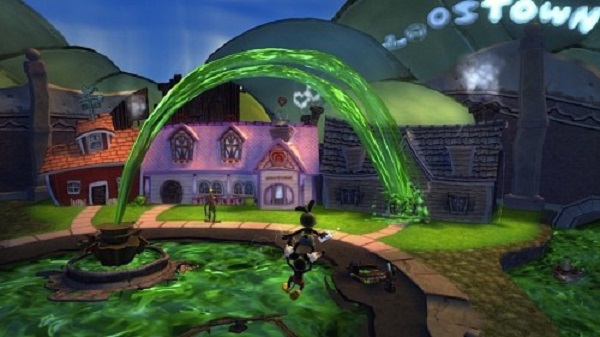 The paint/thinner idea was brilliant two years ago, but now, after another game takes a stab at the mechanic it’s starting to wear a little thin. With luck Junction Point, or another developer, will get the chance to run with it one last time and perhaps this time we’ll get the classic Nintendo inspired platforming action, married to Disney level production values, we’d all hoped for.

Epic Mickey The Power of Two, as it stands, is an OK game. It’s great fodder for the kids this holiday season, it’s below usual retail price, and it does very little to truly offend. It’s just a big disappointment that the promise of the first game has been squandered on a middling sequel plagued by bad AI and misguided platforming.

Power your tiny gaming desktop with this 1,000W PSU from Silverstone