Loki finds himself in an impregnable Panopticon, plotting his revenge on his former brother, the fallen angel Sirian. How will Loki’s scheming manifest, check out Eternal Descent: Loki #1. 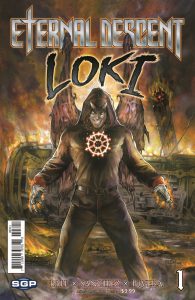 The Panopticon, a prison like no other. A place where the laws of time and space do not apply. Innumerable guards with a single focus, a singular purpose. To watch and guard a single entity. This is where we are introduced to Loki. The singular prisoner. A fallen angel, chained, caged for eternity. Biding his time. Reflecting on times past.

We are treated to a scene between Loki and another angel, Sirian, in the Summer of Love. San Francisco, California, 1967. Sirian is a nonchalant guy working his guitar while sitting on the curb. Loki is talking down of the ‘summer of love’, stating that humanity craves direction, needs to be ruled. Loki proposes an alliance between these seraphim. Two angels could drive humanity in any direction they could imagine.

“It can stir the soul, break the heart and rouse the spirit.”

Loki acknowledges that humanity’s music is incredibly powerful, and can be used to his advantage. So Sirian declines Loki’s offer, and Loki strolls off with musicians at his side.

Cut to 1979, Loki is a band manager and promoter. Using his influence to spread his message, able to reach thousands of people, if not more. Loki is breaking the rules of the Seraphim, and laughing how none of the higher orders have come to stop him. When Sirian tells Loki he will stop Loki, Loki uses his power to cause havok among the crowd. He informs Sirian that this was just a taste, that he must leave, or the entire crowd will burst into such chaos. Shortly there after, Sirian arrives at Loki’s office, to have an impromptu meeting. Loki excuses his assistants, so that the two can hash out their differences.

Space Goat Publishing has some great artists, and Rearte is no exception. The use of color and detail between the angels is beautiful. Sirian on the curb and the sunlight behind Loki can be hard to reproduce, but works beautifully. Sometimes the details as minuscule as the energy blasts can make the difference between a good panel and a great panel. Some of my favorite stylings comes later in the issue, when Loki and Sirian come to a confrontation.