The other Anni-Padda brother’s solo debut sees the Eternal Warrior try to hang up the sword and… sword. Care to guess how that goes? 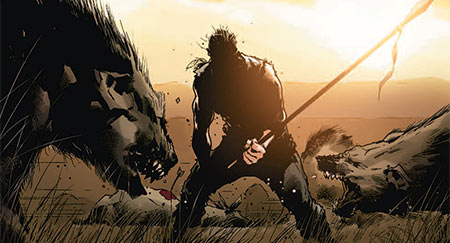 After centuries on the battlefield, Gilad Anni-Padda has abdicated his duties as the Earth’s immortal Fist and Steel for a simple life of seclusion. Living quietly among the wilderness, the undying Eternal Warrior has sworn not to raise his sword again – until his own daughter, long thought dead, brings an ancient war raging back to his doorstep…and, with it, a deadly legacy far bigger than a single warrior.

The Eternal Warrior is a book that I’ve been waiting for personally for a while now. I wasn’t all that big a fan of the character the first time around (in the ’90s), but he’s really caught fire in the new Valiant U and I thought the path that Archer & Armstrong took with him in that comic was really terrific.

It also doesn’t hurt that the creative team behind The Eternal Warrior is writer Greg Pak (from Batman/Superman) and artist Trevor Hairsine. Right off the bat, you know the narrative is going to be something special and the artwork is more or less going to rock.