An adventure worthy of the Gods? Read on to find out!

Etrian Mystery Dungeon is a rogue-like dungeon crawler with RPG elements, and this newest title in the franchise has the best of both worlds of the Etrian Odyssey and the Mystery Dungeon games.

The game looks wonderful at first glance too, and purchasing it  during the first month of release, qualifies the owner to receive or download all of the currently available DLC for free.  DLC which is comprised of a few Character-related quests and some grinding quests to help both beginners and seasoned players alike.

As I mentioned, the visuals are astounding and very pleasant to the eyes. I appreciated how each and every single detail is shown with such an excellent color palette that I didn’t really have a hard time in adjusting to the game at all. Some games feature colors that are either too distracting or too bright to my eyes, or in the worst-case possible, some games feature a little bit of both- but Etrian Mystery Dungeon contains none of the bad sides of horrible coloring. The colors actually reminded me of the palette used in Persona Q, another spin-off from the Etrian franchise released late last year.

I appreciated the hand-drawn character sprites and the design of the various monsters and NPCs that appear throughout the game as well. The characters only have a handful of designs for each class, and a couple of interchangeable color palettes, but I instantly fell in love with the appeal that comes with being able to name them and to help them grow to be the best dungeon explorer that they can be.

The various armors and equipment found in the game look cool too, and are nicely varied. They give off a kind of Western vibe over the Eastern that one would expect from what essentially is a JRPG in the guise of a Rogue-like dungeon crawler.  I also like how the locales were designed!

Levels in Etrian Mystery Dungeon give off a sort of hybrid old-school meets industrial-age-esque steampunk feel, and that’s something you don’t see every day. Overall, the visuals of the game reminded me of why I loved Etrian Odyssey and Mystery Dungeon both. The games are colorful and pleasing to the eyes and I think that more games should try and emulate their example.

The music in the game is superb as well! I have rarely ever felt motivated to grind for hours in a dungeon-laden game than how I felt in Etrian Mystery Dungeon. The composer really knows his stuff. Grinding music, especially with RPGs, were designed to play in an endless loop, but the actual challenge is getting people hooked to the song instead of completely disgusted with it. Etrian Mystery Dungeon actually has achieved that by not being too bold. Yup, they stuck to the basics, some flutes here and there and voila, you’ve got the classic RPG appeal. Knowing when to innovate and when to pay tribute to the classics is key.

While the game does not feature voice-acting (bummer -ed), what’s worth noting are the various sound effects present in the game. I like how they were done quite a bit, from basic attacks to the more advanced spells and skills, to the monster movements, I felt that everything was done well and everything clearly presented what is expected of an RPG game. Simple but effective.

The plot is also a simple one, in that your standard Adventurer wants to become an explorer. So he starts exploring dungeons in order to earn both fame and fortune (It’s kind of like the plot of Dungeon ni Deai o Motomeru no wa Machigatte Iru Darou ka or DanMachi which basically translates to ‘Is it wrong to pick up girl in a Dungeon?’ go check it out!). Along the way, he encounters various people who either give him quests or pains to deal with, and the people who join him in his guild to journey and pillage… err I mean adventure the crap out of the dungeon like no one else can.

Again, the plot is relatively simple and it could have used some more work, but it’s generally not bad… though I guess it isn’t necessarily a good thing either. The game’s apparent lack of a plot is essentially its lowest aspect, but a less-than-stellar plot shouldn’t deter anyone from trying out Etrian Mystery Dungeon, which is more focused on the actual playing than appreciating the story per se. So in this regard, I guess the game sort of did accomplish what it aimed to with the plot, which is basically nothing right?

In place of the plot (or lack of), however are the numerous side quests that the game will basically chuck at you whether you want it to or not. These side quests offer unique perspectives on the world that Etrian Mystery Dungeon is based in.

Not only that, but it also adds a couple dozen hours’ worth of gameplay, and they also add more concrete information (that you have to build from the ground up, mind you) to the already impressive lore that the game offers. So for the lore fanatics (I’m one of them I’m proud to say) and the grind lovers (there WILL be an unforgiving and ungodly amount of grinding in this game), this game is for us! Rejoice!

Related Article:  Tony Hawk’s Pro Skater gets its own documentary

The gameplay itself is classic Mystery Dungeon with minimal changes and optimum improvement, done on the already nostalgic Mystery Dungeon battle-system. The game essentially meshes that with the awesome dungeon crawling that both Etrian Odyssey and Mystery Dungeon are known for. For beginners who are interested in trying this out, think of it like a Dungeon crawling Legend of Zelda game, and if those words failed to make you drool, I don’t know what will.

Quests are given through the town system which is quite similar to what Persona Q did with the Yasogami Highschool. The places that the player can visit are shown on a window which they can explore and to its right is a small preview of the place. After selecting or taking a quest, the player can then get on an airship to visit one of the many Mystery Dungeons in the world.

Players are able to manage their guilds (which is essentially the players party) and their equipment through the Town System in the game and trust me, you’re going to want to do that in this unforgiving game. See, when exploring the dungeon, if the party dies, you lose all of the items and the progress that you have made since your last save. Saving a lot in this game is key and learning when to power level can make all the difference in the world.

Weapon Forging and Tempering is an important aspect of this game as well, and mastering item crafting is one of the most important goals one should set. Equipment is rare but loots are plentiful.

Traversing the dungeons is no easy task, as they are filled with various traps and are protected by the monsters roaming within each of them. What makes making your way around most difficult however, is not the combat by itself, but by the combination of having to successfully conserve stamina, health and the limited resources that you have on hand. Oh, and when you die, everything drops.

Also, each dungeon is randomly generated. No two dungeons are ever exactly the same in any way and this makes things complicated with retracing steps and power leveling. But hey, we Grinders love a challenge right? 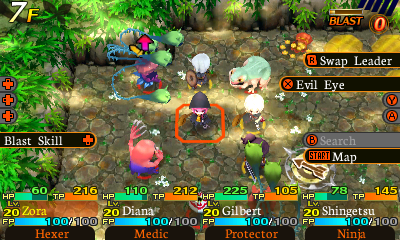 Speaking of grinding, as stated above, this game requires an ungodly amount of grinding in order for players to completely finish the campaign. Countless hours will pass you by, but seeing your characters grow stronger as you delve into the deeper abyss that is the dungeons is rewarding enough on its own. Players can also meet traveling companions in the dungeon and, if certain conditions are met, they are able to recruit these wanderers into their monster-killing dungeon-pillaging machine of a guild!

DLCs will also be a big part of the game – however – they are free for the first month of Etrian Mystery Dungeon’s release! While they are optional and unnecessary to finish the game, the added content is definitely something that will please both longtime and new fans to the series. There will also be some DLCs which will definitely help in grinding for experience or money, but that’s something that players will have to see for themselves.

Briefly before we wrap up- the controls are simple and easy to learn, but difficult to master as each move is essentially one step in a chess game. You move and then you attack, and then the opponent will do the same, or it can choose to fall back. The beauty in this game is that while it is essentially a strategic title akin to, again, a game of Chess, it doesn’t lose out to that limitation. Instead, it reaches out to even greater heights by fusing that aspect with adventure and the fun that comes with it. 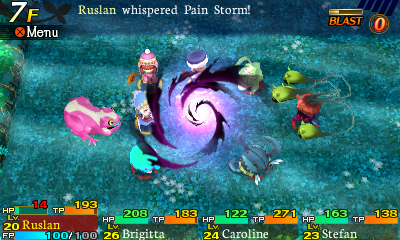 Etrian Mystery Dungeon is a wonderful game that is simple but profound in all the right ways. While the game could have used a more decent plot (or an actual plot, truth be told), it doesn’t change the fact that this rogue-like dungeon crawling RPG is one of the must-haves that the Nintendo 3DS has right now. The game requires an ungodly amount of grinding to barely get by, and mastering the upgrade/forging system is key, but it’s tons of fun once you get used to all that.

Get it while it’s hot and take advantage of the free DLCs – they’re definitely worth it!