Ash finds himself in a peculiar position when a demon asks him for help, in Evil Dead 2: Revenge of Hitler. 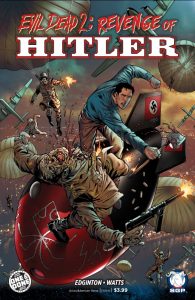 Are you a fan of Evil Dead? Maybe you’ve seen Army of Darkness? How about Ash Vs Evil Dead? If you are familiar with these names, then chances are, you are familiar with Ash Williams. Ash is something unique: he is incompetent in almost everything, save for drinking and killing deadites. While in the films, Ash has severed his hand to save his life, though this is an arc in which Ash was grown from that severed hand.

A skeleton materializes outside a movie theater in modern day Berlin. A familiar face emerges. A feared face emerges. Then gets hit with a snowball. He emerges in front of a line of movie-goers, and he is missing his clothes. Heckled by the crowds, he continues to pontificate as only he can: Hitler has re-emerged.

Hitler was known for sending squads around the globe in search of power, regardless of the source. If there was an occult angle he could exploit, he took it. Evil Dead 2: Revenge of Hitler plays to this angle, when Hitler found the Ex-Mortis, and had passages carved into his flesh. This caused him not to entirely die, but to be trapped between worlds. In addition, can you imagine a world where Adolf Hitler controlled both hell and Earth? There are few ways you can make a man like Hitler worse, but Ian Edginton has certainly found a way.

The world has truly descended into a mongrel state! I can see that I have much work to do!

Ash realizes what sort of trouble he could be in, if he refuses to rise to the occasion, and accepts the challenge. “What ass-hat would summon Adolf Hitler?” But how do you take down a man who has made himself one with the Ex-Mortis? And what will happen when you make a deal with a triune duke of the pit?

Few books can go this far or be this far out there, and still be great reads. Do yourself a favor and pick up Evil Dead 2: Revenge of Hitler and find out.

Evil Dead 2: Revenge of Hitler is brought to you by Space Goat Publishing.

The Flash Into The Speed Force S3E16 (TV) Review