Take a magical journey down action/RPG lane in Shiro Games love letter to a genre. 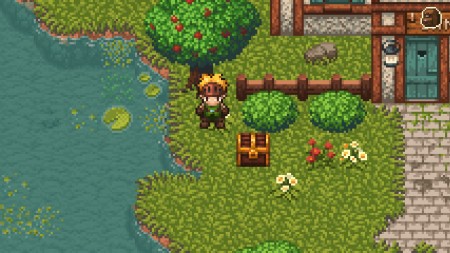 Evoland is an interesting game. Maybe that’s not the way that Shiro Games would have liked its ode to all things Zelda and Final Fantasy (with a little Diablo/Torchlight thrown in) to have been described, but it’s the sum total of my experience with it. So… interesting, yes, but is it any fun? Read on.

First off, if you’re looking for an epic storyline you can forget it. That’s because the tale told in Evoland is as generic as they come- and that’s intentional. The hero is a Dragon Knight who’s job it is to protect the realm from the baddies. It’s simple, and that’s intentional too. See Evoland is more about the journey of the role-playing genre on the whole, and not really about the journey of the little guy that you control in this particular title.

The game starts out in the classic green-scale of the Nintendo GameBoy, which is both cool and odd at the same time as the GB wasn’t really known for its RPG’s (was it?), and goes all the way up to the pretty much present day with some decent 3D graphics. As a big fan of the classic Zelda and the first few Final Fantasy games, I had a great time playing through the evolution of the genre and got a big kick out of seeing all the familiar looking text boxes and animations. It’s really neat.

Pretty much every ‘level’ of the console RPG’s progression towards what we play now is present and accounted for in Evoland. You’ll get the GameBoy looks that I mentioned, but you’ll also see NES-type graphics, a cool 16bit looking coat of paint splashed about and so on. These are really the most fun parts of the game, well they were for me anyway. I’m not sure how great folks who are too young to have played NES and SNES games might think they are, but I loved ’em.

I will say that the more recent looking graphic sets in Evoland do lose quite a big part of the shine off the 8 and 16 bit rose and just kind of feel old. If you’re going to make a game like this, then you have to include the more recent eras though. You can’t just go up to 1998 and then stop, but that said they do kind of hinder the old school-ness of it all and get to be a bit of a drag. 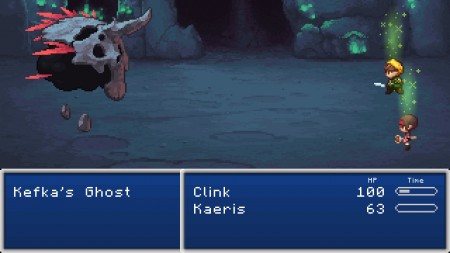 Keeping things fresh though, are the constant evolutions of the game as it moves through the genre-timeline. Much like in DLC Quest (remember that one?), as you progress through Evoland you’ll unlock more and more genre conventions. In Evoland that’s done by popping a few chests open as opposed to DLC Quest’s ‘purchasing’ system. Shiro really did their homework in this area too, as they nailed pretty much every JRPG and Zelda title on the head when it comes to all the little things that make fans love ’em… and hate ’em. Remember that not everything in the most classic of games were good things… Oh hi random battles, so sorry you were invited.

I cannot tell you in any proper way the level of disgust that random enemy encounters stir up in me. I hate them, to put it mildly. For the life of me, I can’t figure why Evoland would use them to such an extent on its overworld. That’s not to say that they shouldn’t be in the game at all, because for a game like this you pretty much have to have them in there, but I would have hoped to have seen them maybe once or twice instead of the few times a minute that they appear as you march across the game world.

As for the rest of the game, other than the ‘gimmick’ that makes up the totality of the quest, the controls are simple enough and evolve right along with the graphics as you go. Likewise the music is appropriate to the console generation you’re playing in at the time as are the sound effects.

Related Article:  We Are Football review -- A new approach to the beautiful game

It’s got serious charm and a real love of the source material that it mimics. It’s also extremely unique in the sense that it’s basically a playable museum for JRPG’s and their more action oriented cousins. I couldn’t really come up with anything other than DLC Quest to compare it to and even that’s tenuous to be honest.

If you’re a fan at all of the really classic Final Fantasy and Legend of Zelda titles, you could do a lot worse than Evoland. If anything it might even give you pause to bust into that cardboard box in the basement and fish out a few of those old carts laying at the bottom.