Faith, a psiot, has become the protector of Los Angeles. Now she must face an escaped psiot prisoner. Find out what’s happens in Faith #6. 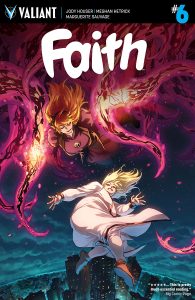 We find Faith having her power siphoned off by a new enemy, when a mysterious team of military-types clad in black fire upon our hero. The shot is enough to scare the redheaded villain, Zoe, away. After Faith promptly questions the Project Rising Spirit squad, she is invited to tag along, due to being on the same team.

Faith is trying to balance her efforts, criticizing the Rising Spirit agents for doing their typical government hush-hush work, while consoling Zoe’s mother over her kidnapped daughter. We learn that it’s not actually Zoe, that is the villian, but rather the black cat that travels with her: Project Dark Star.

Zoe is ambivilent to the damage she is causing. As a budding celebrity, she was caught in tabloids and became the butt of jokes. Project Dark Star recognized and fed off of her anger. When that wasn’t enough, they sought out the anger of others.

Faith is able to get through to Zoe, that she recognizes what is going on. Zoe severs the link with Dark Star. Rising Spirit is able to subdue and apprehend Dark Star, taking the cat back to their secret labs. Faith is able to help people, even without the use of her psiotic powers.

I’m new to the Valiant line of comics, but Faith was a good place to start. An orphaned girl who learns she has powers, but she’s not invincible. Faith seems incredibly human, and to that point she is incredibly endearing. While other heros have tools and billion-dollar-budgets, Faith is able to fly. That means that she will have to rely on her natural abilities to succeed.

The art style of Faith is refreshing. Giving a good amount of detail, but also blurring the lines of western comics and eastern anime. I, for one, look forward to seeing how the future baddies appear. I love the depiction of Dark Star and Zoe’s powers.