The final issue featuring Marvel’s first family is almost here, but will it signal a hiatus, or a permanent end for the team? 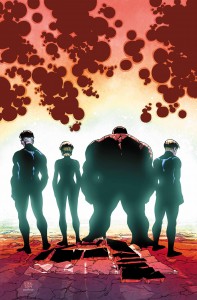 This April, four will stand together…one last time! Today, Marvel proudly presents your first look at FANTASTIC FOUR #645 – the oversized, senses shattering final issue! James Robinson and Leonard Kirk are joined by a murderers row of fantastic talent to give the First Family the grandest sendoff of them all!

Will the Fantastic Four defeat the Quiet Man and the corrupted forces of the Heroes Reborn universe? Will Johnny Storm get his powers back? Will Reed and Sue be a family again or will it all be torn asunder? Questions will be answered in this main feature story!

This is the end of the Fantastic Four – 4ever! Be there when the most controversial Fantastic Four story concludes in the extra-sized FANTASTIC FOUR #645!

Pre-Order Fantastic Four Volume 4: The End if Fourever on Amazon

The end of an era right here. With the last issue of FF, Marvel puts on hiatus one of the oldest and best-loved of its properties. Sure the sales might not have been there for the last few years, but these are legendary characters.

I’m sure too, that at some point after Secret Wars (and after the FF movie comes out *ahem*), we’ll see another Fantastic Four comic. That’ll be a ways off though, as we already know that Johnny Storm will be coming to the Inhumans book as a regular character, and I’ve heard that Reed Richards will be figuring into a new book post-Summer as well.

So for now, this is it for the first family of Marvel Comics. I can’t say I’ve read an FF book in the last decade, but it still makes me a little sad to see the team go… even if it is just for the time being.

The All-New Ultimates make their debut next month

Deadpool squares off against Sabertooth next month