Though horror-themed games are making a big time comeback in 2014, the horror movie adapted into video games seems like a long forgotten footnote in the annals of gamingdom.

I can very clearly remember the days of the NES and the horror games that appeared on the console. It seems kind of strange honestly, considering that games were mainly viewed as a kids medium or ‘toy’ back then in the 1980’s, but there were quite a few horror properties both of the movie and original variety that were adapted to the console.

Just off the top of my head I can name the Castlevania series, Ghouls and Ghosts, Maniac Mansion and a ton more – all great games, some of which are considered all-time classics and some of the best of the best games ever. Going into the horror-movie titles though, stuff like Nightmare on Elm Street, Friday the 13th, and (if you want to stretch it a little) Predator are kind of on the other side of the spectrum. Really none of these games (of either variety) are scary at all in today’s world, thanks to the massively evolved industry that has become video games. Back then though, in that bygone age, some were pretty fright inducing. In the way of the horror-movie game though, some of that horror might have more to do with the fact that they weren’t exactly the best made titles in the world.

I don’t think that there’s anyone who would argue that Friday the 13th was one of the best games of all time, and the majority of movies that saw translation into games befell the same fate- horror titles included. That fate of course, being mediocrity… at best. Sure fans of the individual properties might have had some good times with a few of these titles, but the majority of gamers simply looking for a spooky play through would have been woefully disappointed; I know I was.

Related Article:  Coming up: The Games of April 2018

That was pretty much it for the sub-genre too, as the horror movie adaptation’s time in the sun- uh, moonlight didn’t last all the long and even when it reappeared, it was only for a game or two before vanishing again. Although the film category itself is still seeing success with steady releases and has been enjoyed for decades, horror games went the original IP route almost exclusively since their infancy and throughout the genres lifetime. Even original games have, for the most part, been in hiding in recent times though; only seeing a reemergence now with some games that look like they might be the best scares in years.

But through the years since the first few films were converted into games, there’s really been nothing for movie fans to sink their teeth into… except maybe a Dracula or two. As I mentioned, horror games are coming back though (read about that here), and the horror-movie game is too in a way. This year will see the release of Alien: Isolation, a game that could usher in a turnaround for the whole section of the industry. 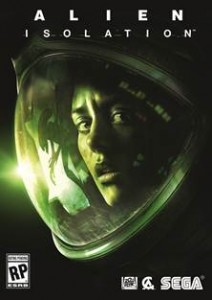 Though not based on any movie in the Alien film series in particular, Alien: Isolation has some of the key conventions covered. Like most horror films, the game stars a lone protagonist fighting her way through darkened corridors as everyone else around her is killed or goes missing. Weapons are sparse, technology will not save anyone, and there are certainly no space marines around. Oh, and the enemy? You won’t find any hives of aliens or queen to roast with a power-loader and a flamethrower. There’s only one lone xenomorph- out there, hunting you, in the dark.

If that’s not a great setup for some chilling gameplay, I don’t know what is. And being that this title is taking the mythos set up in the movies seriously, it just might help to kickstart the whole horror-movie buzz. With horror games poised to make that big comeback that they’re threatening to, it doesn’t seem like it would be all that much of a stretch to get some more horror movie properties in on the action as well.

Personally, I think that standard horror fare like Halloween, done in the same way as Alien: Isolation or something like Outlast could be extremely compelling and capable of delivering serious frights for gamers. And that formula would really work for any horror franchise as most do feature a lone creep stalking a group of people with one or two heroic characters standing in their way.

There’s a real air of futility around horror movies too that I think games could learn something about. Although it might be frustrating to some degree for viewers who need exposition in their entertainment (that’s me most of the time too), the feeling of helplessness in the horror genre can really lend itself to some very cool and interesting narratives. There isn’t too much of that in video games as your character is usually strapped with all manner of high-powered weaponry and capable of facing down threats of all shapes and sizes.

Although I’m not the biggest horror fan around, I think there’s something to be said for games like the original Resident Evil, where you play as a team member who’s underpowered and outnumbered, and where slicing through every foe in your way isn’t feasible all of the time. Video games have learned well from movies in the past, setting up grand space-operas and intricate, mature story arc’s that were only seen on film previously. Why can’t they take a page from the horror flicks of old and give players a truly great game based on a classic monster-movie IP?

I think it can happen. Based on this year, and if the horror games coming up sell well, there just might be a very large renewed interest in the genre. Then we might really see what these new pieces of hardware can do, and how completely they could scare us into turning on the lights and hiding under the covers.

So what do you think? Do you think we’ll ever see some high-quality horror games based on big movie properties? Do you think the whole thing will just fade away once more, not to be seen for another 5 or 10 years? Leave your thoughts in the comments below, we’d love to read them!