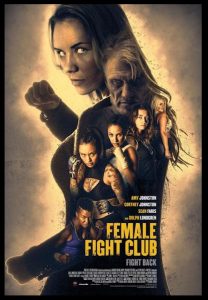 Stop right there. You’re probably conjuring some spin on the 1999 film of a similar title. Don’t bother, as this is not that. The film’s title in other markets, Female Fight Squad is more appropriate. Now that I have that disclaimer out of the way, let’s get in to it.

Female Fight Club brings Amy Johnston to the forefront, with some drama provided by Dolph Lundgren and Chuck Zito. Amy has been making a name for herself as a stunt double to the stars, and now she’s got the momentum (in more ways than one) to make it on her own. Lundgren and Zito get modest screen time, just to add to the depth of the story a bit.

There has always been an illegal fighting ring in Rebecca’s (Amy Johnston) home town, and with time she finally was able to fight her way free. It has been five long years since Rebecca left her home town in the rear view mirror. Rebecca’s father Holt (Dolph Lundgren) is in prison, so family friend Zeke (Chuck Zito) has picked up the mantle of keeping an eye on the girls while training boxers at the local gym.

Rebecca gets a knock on the front door when her sister Kate comes begging for her help. Kate owes a lot of money to some bad people, and she wants Rebecca to train her and her team to make up the difference.

It is a familiar plot device. Friend’s in trouble, to come out of hiding. That’s fine, it is a scenario that works. Add to the drama with some family secrets in play, and you’ve got the makings of a good story.

Who’s In The Ring

Amy Johnston displays the agility that would make any fighter proud. It’s tricky enough to survive facing one opponent. Stand in a ring while four people line up, believing they can outshine the others in the room.

Lundgren and Zito appropriately are showing their age here. Zeke is to Rebecca what Mickey was to Rocky: the sage in the corner that has been through the rough-and-tumble, taken the lumps and survived to tell the story.

There is a twist in Rebecca’s plan for coaching the band of ladies that you can predict that puts Johnston back in the spotlight that she never wanted to revisit.

People give movies a bad break if they are not the Hollywood multi-million dollar release, with all the press and media trimmings.

The truth of the matter is that movies are not a simple product to produce. So many things have to go right just to get something workable on camera. Female Fight Club is a prime example of this. We’ve got some star power, we’ve got the lighting, there is even a soundtrack going on. While I am sure that there could always be ways a production company could up the ante, but the truth of the matter is that this was a solid film, and I hope more people see it than probably will.