Take a trip back to the golden age of 16bit platforming. Eurovideo and developer Bonus Level’s Fox n Forests is a gem.

This review is actually pretty late. Released a few months back, our take on Fox n Forests should have seen publication a while ago. I’m going to go ahead and blame E3 for that delay, since we were a little crazier than usual around here. If you were waiting on our word though, wait no longer – and for goodness sakes go buy this game.

Fox n Forests is a return to form for a genre that’s been only partially existent for a while. Good to great platforming games are few and far between these days after all, though they used to exist in maybe the most prevalent of genres. Those though, were the days of 8 and 16bit gaming.

Since then, there was a slow decline, followed by a nearly complete drop-off. And today, platformers of any ilk have almost completely vanished from the gaming landscape. That’s a shame, since, when they’re done right, they can present some truly glorious gaming moments.

And for the most part, that’s exactly what Fox n Forests does. 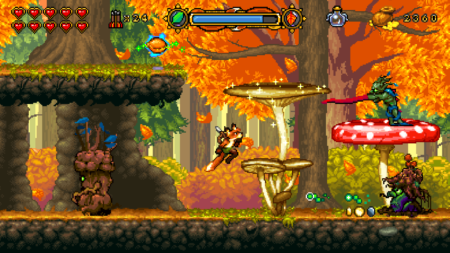 Rick the fox is the main character in Fox n Forests, and he’s not the typical side-scroller hero. Yes, he’s a cute little anthropomorphic animal, but he’s also got something of an edge. Rick has a crossbow (with a bayonet!) that he uses to battle his foes, and something of an attitude problem. Well, he does when it comes to his sidekick, a little bird with something of a big mouth.

Unlike some games that attempt such a relationship, this one’s actually pretty funny. There’s actually a decent amount of humor sprinkled throughout Fox n Forests in general, and it almost all comes off well enough.

The story here surrounds the seasons themselves, and it’s not just there to move Rick along. The game’s narrative actually plays directly into the hook, in that changing the seasons is an actual gameplay mechanic, and is necessary to progress.

In each level, you’ll have the ability to switch between a pair of seasons. Spring and fall, for example, include almost entirely different sets of graphics, and actually change up the play. If Rick needs to make a jump that seems impossobel, try altering the season to the autumn. Suddenly giant falling leaves make for platforms that you can leap to and from.

Likewise, freezing the level with the winds of winter can take care of enemies and even make for ice bridges that Rick can cross. Just be warned with all of this, changing out of the level’s default season isn’t permanent. The “new” season that Rick can call upon is only temporary, and is timed by how much mana he has stored up. Needless to say, don’t get caught on an ice bridge when it thaws. 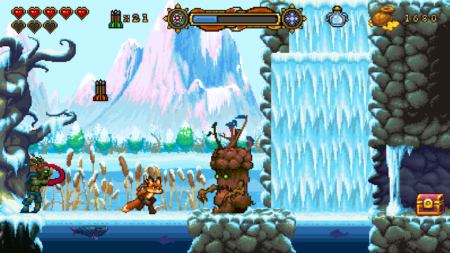 Aside from the season changing, the gameplay in Fox n Forests is blissfully old school. If you’ve played any classic platformers, then you already know what to expect. Rick can jump, shoot, duck, climb, and do pretty much everything else that you’d think.

A cool addition is that he can also melee however. Rick can use his bayonet to slash at baddies from two positions, which does come in handy. I will say that it would have been nice to see a knock-back effect, since melee attacking an enemy doesn’t phase it at all. So if you’re attacking a more powerful foe, he’s not going to stop. He’ll just keep coming, causing you damage even though you hit him. 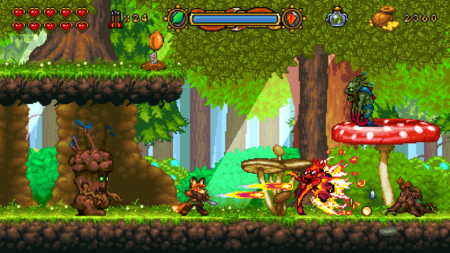 Also neat though is the crossbow itself, since it can take different ammo types. You’ll get access to addition arrows as you play, which have differing effects. Differently colored ammo also can activate secrets in the game, by hitting bullseyes scattered throughout the levels. You’ll have to head back into different stages when you get a new arrow type if you want to discover everything that Fox n Forests has to offer.

Fox n Forests is made to look like a classic game, that’s one of its hooks. So I’m not saying anything out of turn with that statement. The devs aired for that aesthetic, and hit it square.

Related Article:  Crysis Remastered officially coming to PS4/Xbox One and PC next month

While Bonus Level actually says that they had the SNES in mind, Rick’s adventures look like they could easily be playing on a Sega Genesis to me. They have that whole feel that classic Sega titles had, including the charm and level of detail.

This game is loaded with that, with tons of cool stuff built into the well-designed stages. That’s kind of doubly true actually, since each level has a pair of seasons that you can play in. Also worth noting are the bad guys.

The enemies in Fox n Forests range from cutesy to actually kinda creepy. All of them though, have the same attention to detail that the stages themselves do. There’s a great amount of imagination at work here too, with some seriously cool designs. I do wish there were more of them, not that that’d be overly fitting with the generation that this game is paying homage to.

While we’re talking about the presentation, the music in Fox n Forests is very solid. I don’t think there’s anything here that’ll have you humming it hours after you’re done playing, but it’s good enough and doesn’t get in the way of enjoying the trip. 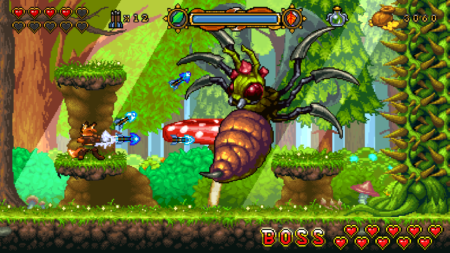 There aren’t too many down sides to Fox n Forests, but there is one glaring one. Though it thankfully doesn’t get in the way too often, the checkpoint system is wonky. I don’t mean that as in “it’s broken”, I mean it in the sense that it’s odd. And yes, I get that games from the 16bit era didn’t really even have checkpoints, so do with this as you will.

Some of Fox n Forests’ levels are pretty lengthy. Not overly so, but long enough. So it’s nice that there’s a checkpoint system. If you should get Rick killed at some point, you don’t have to start the whole stage over. And each one is manned by a little badger who’s actually kind of fun.

Related Article:  The Among Us 'Town of Us' mod adds 19 new roles to the game

So what’s so odd? Well here’s the thing: in order to unlock checkpoints, you have to spend in-game currency. If you don’t have any, then you can’t turn the checkpoint on. I’m sure you can see how that could be annoying.

It’s not like it’s game-breaking or anything, but it’s enough to make for some uncomfortable moments. Again though, there isn’t much other than this odd design choice to mar Fox n Forests. This game’s a gem that’s loaded with charm and tons of fun.

If you’re into 16bit retro gaming, or just good platformers, then check it out. I doubt you’ll be sorry you did.

Copy Provided By Publisher For Review 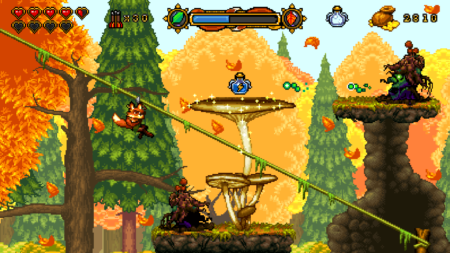 Fox N’ Forests does a great job of pulling in enough classic elements to feel like a gem pulled out of time.

Between levels, players can visit a town to upgrade moves, stats and abilities. These upgrades are satisfying and useful. Mechanically, Fox N’ Forests is a joy. Jumping, shooting and attacking are all very satisfying. Levels are constructed in ways where players are forced to use all of the tools in their arsenal.

The game’s biggest mechanic is the ability to use magic to shift seasons, impacting the world around you. This is not as gimicky as it sounds, and is actually very satisfying.

My biggest problem with Fox N’ Forests is the checkpoint system. Players are forced to pay to check in. This works in theory, but the gap and progress between points hurts an improportianate amount as a player. Fox N’ Forests will likely carve out a faithful following thanks to its strong mechanics and aesthetics.