The first new Gabriel Knight story since 1999’s Blood of the Sacred, Blood of the Damned is headed online as a free-to-read digital comic book. 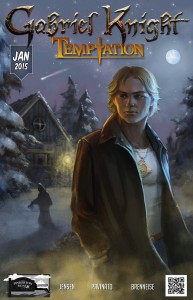 I’m sure fans feel the same way. With the recently released Babriel Knight: Sins of the Father remake under the company’s belt, series creator Jane Jensen’s Pinkerton Road Studio has an all-new story featuring the mystical hero on the way. It’s a little different for the series, as there’s never been a comic book featuring the Gabe Knight universe before, but fans should take to it just fine, especially since this is the first real new story in a good long time.

The tale follows Knight, who’s just completed his ‘destiny’ in Blood of the Sacred, Blood of the Damned (the third game in the series). He’s alone, as Greace has flown the coop, and sort of listless as he wander the streets of Germany. Just in time though, a new mystery pops up to catch his attention that just might be the start of a whole new chapter in the franchise. And that’s something that I’m positive fans would like nothing less than.

Chapter 1 of the new mini-series is already available and can be downloaded by clicking here. Chapters 2 and 3 are set to debut in January, so not too far off. And if you’re aran who;s yet to play the latest revision of the original Gabriel Knight adventure, then you’re in luck as the game is on sale as a part of the Steam Winter Sale.

Shredder is going to hell in new TMNT mini-series