Hey everyone, this week we have info on the upcoming GRID2 and GTA5, as well as the latest GamesRadar Photoshop Mash-up (that’s #3 if you’ve been counting).

When it comes to racing games, few have been as impactful as GRID. Sure, GT is for the car-lovin’ purists; but GRID has a little something special that GT doesn’t: it’s made by Codemasters, who’ve proven themselves as capable hands to put a racing franchise (or a few) into. So GRID2 is a pretty big deal then, and GR has the skinny right here on 10 things you need to know, including a heightened sense of immersion (AI racers have personality, 12 human racers at once, crash physics from GRID’s Destruction Derby mode are now in the real thing, etc) as well as some nifty-looking social/multiplayer features. It’s good to see that Codemasters is doing the franchise justice with the sequel, and I’m definitely excited for the game. 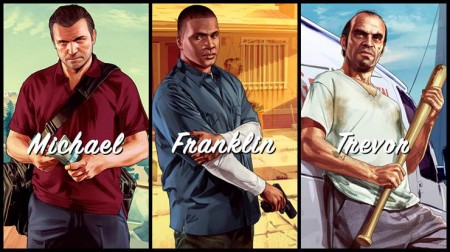 GTA5. It deserves to be in a sentence all on it’s own, it really deserves it. I’ve been playing the franchise since the very first top down pixelated version, and I’m ready for more. GTA5 is reportedly 5 times the size of Red Dead Redemption, which was already a pretty big place to begin with. It’s also got 3 playable characters, something that’s never been done and will flesh out the narrative in a “long-form narrative TV series” -style. And man, you are going to want to experience the story of GTA5: it’s got Trevor, and if you watch the trailer in the GR article, you’ll probably fall in love with the psychotic and ‘remedial’ drug dealer. And with all of the content you’d expect in a sequel (more minigames, optional random sidequests, dynamic wildlife, etc) plus some more top-notch storytelling, it’s definitely something you’ll want to mark your calenders for.

GR has a photoshop mash-up feature, where they make puns out of existing things and game names. It has to be said though: there’s so much nostalgia for 80’s/90’s/early 00’s tv shows here, I totally forgot about the pics after an hour of netflix and google-searching for shows.

That’s all for this week, enjoy it!

Temtem Weekly Reset: Two golden Lumas, but none from Kisiwa