Gear.Club makes the jump to Nintendo’s Switch with surprisingly good results. If you’re looking for a “realistic” racer for your consoles, you’ll want to have a look at this lite racing sim.

The Club is open

I’m not at all familiar with Gear.Club as a series, let’s get the out of the way right from the jump. It’s apparently been available for a while on iOS and Android handsets, and has a solid rep from what I’ve seen. As for a hoe console release though, this would be the first for Microids and Eden Games’ racer.

In the weeks leading up the game’s launch today, I have seen quite a bit online about how it’s not a “Gran Turismo” or “Forza”, and no, its definitely not. From what I’ve played of those respective car series’, they’re pretty in-depth, and much closer to a true simulator than what Gear.Club Unlimited is. Though in fairness, GC isn’t really trying to be those games.

What this title is, is a pretty fun racer that’s got some depth. No, not an overly massive amount of depth, but enough to offer more than solely on-road racing.

Most of what I’ve seen in the way of talk about Gear.Club has been about the graphics. No, Gear.Club isn’t going to blow you away when you fire up a race, but it’s honestly no ugly duck in any way. In fact, I actually really like the visuals here.

Gear.Club has a really nice flow to it, and the areas of the overall map that get unlocked as you play can get pretty different. For instance, you’ll start out in a beach-y area, and move on to a town locale. Eventually, you’ll hit a cool desert/mountain area too. So there’s a nice variation.

Related Article:  Tales From the Borderlands Episode 3: Catch a Ride (Xbox One) Review

I do have to add something about the night stages. For some reason, they’re almost all pretty dull and don’t have the pizazz of the daytime races. I imagine some more lighting effects could have solved that “issue”, making things a little more interesting. They’re not all dull, but I’ve found most of the ones I played to be so. 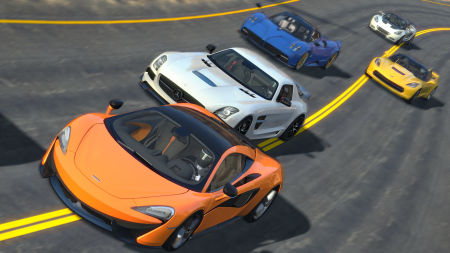 While I’m pouring some praise on the looks of Gear.Club here, please don’t get the impression that this is a game that you’ll confuse with Forza. It’s not. Again, it’s not bad looking at all, but Gear.Club isn’t a graphical tour de force. And mainly that’s due to the maps themselves, which can look a little last-gen. This is decidedly less of a factor if you’re playing in handheld or tabletop modes. There GC actually looks pretty terrific.

Oh, one last note on the graphics- you won’t find any damage here. If your car collides with another while out on the course, basically nothing happens. Sure you’ll slow down, but your ride won’t exhibit any visible damage, or have anything that you’ll have to repair in-between races. In a way, that’s kind of fun since you can spend your virtual cash on improvements for your garage instead of fixing an door or an engine, but still. There’s no denying that not having a damage model for gamers to deal with kind of ruins the whole “realism” thing.

As for the sound, it’s not bad. But honestly, if you’ve played a racing game then you’ve heard all the revving and screeching tires that Gear.Club has already.

In the way of control, Gear.Club is very solid. Not that a the controls are overly complex, but they work and work well. Breaking, hitting the gas, and steering around curves and down straightaways are all actions that come off without a hitch. You can also change your view of the action in the game, though not to any great degree.

By that, I mean that you can pop between a third-person or a windshield view of the course. That’s it though. You won’t find some of the more “out there” views that some racers offer, like a car-side-mounted camera or straight up first-person perspective. Not that that’s all that much of a loss mind you.

I’m no racing aficionado, but I can’t stand anything other than playing in third-person. I usually do prefer it be a little more zoomed out though, than what we get here. Gear.Club seems to have the camera locked in a very close “over the roof” position. It’s fine, but probably could have been a little better. 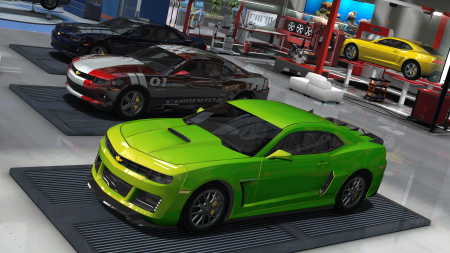 One element that I feel is spot-on here is the customization that you can engage in. Again, I’m not a huge race fan, so I don’t want to get bogged down in countless menus. What you get in Gear.Club isn’t overflowing, and it’s not bare bones. It’s a sweet spot that I in particular really appreciate.

There’s a garage in the game where all this takes place, one that you can really spruce up over the course of the game. You’ll start with very little, but can expend your workspace to include paint-sprayers, a body shop and more. All you need to do is earn cash to buy all this cool stuff, which you can acquire by winning races.

You can even get chairs, a stationary bike, and a coffee machine for your space, to keep your driver occupied. It’s honestly pretty neat, and an enjoyable “in-between” to the meat and potatoes of the races. But let’s get back to the customization.

Options include new gear boxes, tires, body kits, and colors. More than just including basics, you can also tweak most of these improvements via sub-menus after you select one. It never gets too over the top though, and the game keeps you on track, improving what you want to easily so you can get back to driving. Or, you know, watching your drivers sit around and drink coffee. Whatever you prefer.

If you’re looking for multiplayer, then Gear.Club Unlimited has a bit of what you want. Sort of. 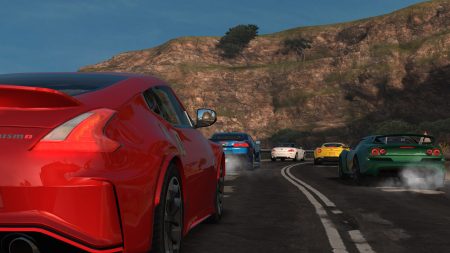 First, you can play in four-player split-screen races. Yes, that’s awesome. I love that Eden Games included that option here, and I wish that more racers (and titles of other genres) would get back on board with the splits. It’s always fun to get a game going in a room with a few friends. Heck, it’s worth it for the trash talk alone.

Aside from that though, what there is in terms of multiplay is probably not what you’re used to. Why’s that? Because there’s no real online mode. What you get instead is a ghost race mode where you race against the best racers from that given day. Yes, I said “ghosts”. Your car passes right through these other vehicles, so you’re (in effect) just racing against times.

This is probably the weakest part of Gear.Club, as a true online racing element would have been awesome. And I mean that, since I’m an old school PC gamer who doesn’t want to talk to people he doesn’t know. Getting in a few races in an online Switch racing game would have been perfect for me.

Even without that though, Gear.Club Unlimited is a solid racer for the Switch. For starters, it’s the only one to offer a more realistic experience, and secondly, well it’s just a good deal of fun. Just remember that, if you’re a more highbrow racing fan, you might not enjoy it quite as much as I did.

EA Reveals the First Details for the Switch Version of Fifa