Nowhere near as silly as the name implies, Grey Goo is an RTS in the classic mold, and that’s not a bad thing. 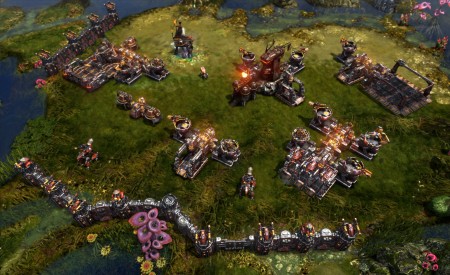 Grey Goo is a real-time strategy (RTS) game developed by Petroglyph and published by GreyBox. It was released on the 23rd of January 2015 and, as it stands, has a 77/100 on Metacritic (which is quite good). In this review, I’m going to try and look at as many different aspects and game mechanics as possible.

As an RTS junkie, I was very excited when I saw Grey Goo was up for grabs here at Brutal Gamer. Actually, that’s a lie. What I meant to say is that I had never actually heard of Grey Goo, nor could I have guessed what kind of game it was from the title. The name is sort of off-putting! But, after getting myself up to speed on what the game was, it did look like a blast, so I was happy to get my hands on it! So, let’s get into it!

For those new to the game, I feel I should point out that the main menu has an encyclopedia – which is extremely useful! It even has a ‘primer’ tutorial for anyone not familiar with RTS gameplay and style, which steps up gradually to more advanced controls and tactics. The three factions in Grey Goo are the Humans, the Beta, and the Goo. The encyclopedia is a great source of information on unit and building types, strengths and weaknesses, and tech upgrades. All of which is very useful information and is imperative to understand if you wish to become a better, or even moderately good, player. 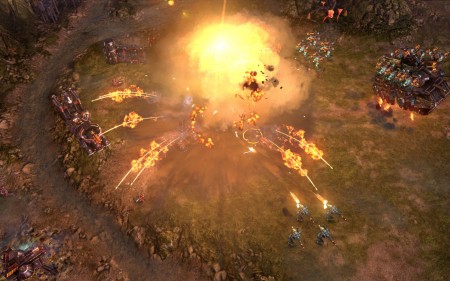 The game and combat style reminds me of StarCraft. (Although I’ve never really gotten into StarCraft, I have watched the occasional tournament and livestream.) Grey Goo offers different game modes, including Campaign, Ranked matches, and Unranked matches. Before I ventured out into the world of Ranked matches, I tried to get a good feel for the game. Typically, when starting any new RTS game, I stick to Skirmish and/or Campaign modes for the first 5 to 10 hours of gameplay.

For me, the cut scenes during the campaign were awe-inspiring; absolutely beautiful! The characters look like they’re standing directly in front of you. The campaign itself has a plot that’s actually engaging too, and well thought out. However, although the story behind the campaign mode is very well written, the game does something that annoys me with RTS campaigns in general – the locking of certain building and unit types until you’ve got to a certain point in the story or mission. This reminds me of Galactic Conquest in Planetary Annihilation. While the AI seems to be able to build whatever, you are limited to X, Y, and Z for the time being.

As for the matches, depending on the time of day and what day of the week it is, it seems it can be very difficult to even find other people who are playing online. Also trying to determine whether you’re in the same skill level, from what I’ve seen, is not really possible. This leads to the more than occasional, one-sided matches.

If you’re still learning the game, there always seem to be people streaming on TwitchTV (http://www.twitch.tv/directory/game/Grey%20Goo), normally playing Ranked matches. This can be a great place to learn the game mechanics, as opposed to the trial-and-error method or reading countless forums. You can see why people do things and what consequences they have, how to counter different events as they happen, and if/how to micromanage units to make them more effective. In a game like this where there are three different factions to play, each with their own pros and cons, it allows you to see what they are like in gameplay. There are also quite a few in-depth guides on Steam, covering everything including 1v1 openings, beating the campaign, starter guides, and how to play each faction. 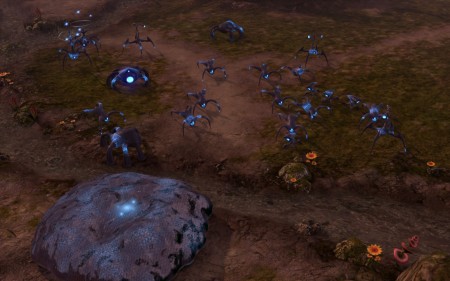 The game also has a terrain editor, which allows you to make custom maps and upload them to the Stream workshop. There is a fair amount of tutorials online to get you started, and there is also a subforum for the terrain editor, along with an FAQ thread (https://www.greybox.com/greygoo/en/forum/topic/1148/). The terrain editor has a ton of features, allowing you to completely change every little detail. It can be quite daunting at first, but it is really nice to see them put the effort into giving the community such tools, to customize gameplay.

Related Article:  Is a Resident Evil 4 Remake on the way?

Currently the price of the game is $54.99 CAD (Canadian Dollars), which can be steep, but for what you are getting as the consumer, I feel it is definitely worth it. (That, of course, being that you really enjoy RTS.) If you just want something you can casually play, the cost-to-entertainment value ratio may be off, and it may be better to wait for a sale. However, if you’re really into competitive ranked multiplayer, now would be a good chance to climb the leaderboards, while the community and player base is a bit smaller than it, hopefully, will be.

All in all, this game is very well done – hats off to Petroglyph for another very well put together strategy title!

While the upfront cost to get into the game may seem high, it is a definitely required addition to any strategy gamer’s Steam library. The graphics are very well done, it has a growing community (which is good for an RTS, since they’re unfortunately a ‘niche’ market), and there are ranked matches available for the very competitive gamers out there.

Out of 10 I’m going to give this game an 8. It is nice to see classic RTS game play combined with more modern technologies, and as previously stated a much needed addition to any library for a strategy gamer!