Marvel gives readers a sneak peek at the cover of the galaxy-spanning second issue of Guardians of teh Galaxy. 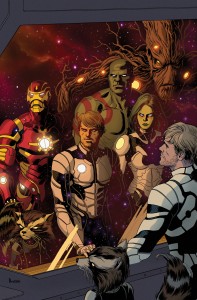 Marvel is proud to unveil international superstar artist, Paolo Rivera’s, jaw dropping cover to Guardians of the Galaxy #2! It’s the book that has everybody talking and this April, the blockbuster team of Brian Michael Bendis and Steve McNiven with Sara Pichelli dial it up a notch bringing fans explosive action set across the entire Marvel Universe. The Badoon have their sights set on Earth, and Star Lord, Gamora, Rocket Racoon, Drax, Groot AND Iron Man must rush in to stop them. But with the brutal invasion happening in London, the fate of the Guardians of the Galaxy may have been decided millions of miles away.

I’m still a little unclear on whether or not Iron Man is going to be a regular fixture in this book, or if he’s just along for the ride to get things started. Tony’s new space armor is definitely in line with the look of the rest of the team though, which makes me think there’ll be some form of Stark presence in Guardians of the Galaxy for the foreseeable future at the very least.

Roster aside though, Rivera’s work on the second issue cover is really terrific stuff. I love the reflection idea and he even managed to make Rocket Raccoon look tough. Great stuff.

Look for Guardians of the Galaxy #2 to hit stands on April 24th from Marvel Comics.