Halsey and Jul are on the trail of a Forerunner artifact of tremendous power, and it’s up to a team of Spartans to stop them. Oh, and a scientist. And… an Elite? 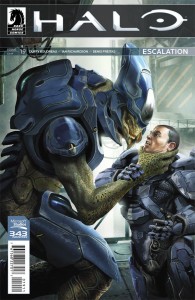 Long one of the Halo franchise’s main villains, the Elites (or Sangheili, as they’re properly called) were the main force for the Covenant for a long time. Once the barbaric Brutes entered the picture, their role diminished, till all-out civil war broke loose.

Now in a new era of the franchise, the war between Humanity and the conglomerate of alien species’ known as the Covenant is over. Well, it’s kind of over. Earth and her colonies throughout the galaxy are rebuilding and once again strengthening a depleted military, while the Sangheili and some other races of the Covenant are getting back to tending their own affairs.

Not all of them though, as some long for a return to the Covenant of old, and they’re seeing about it with an extreme sense of purpose. Enter Jul ’Mdama, a Sangheili with a Covenant army of his own, that’s only getting stronger. He’s allied himself with the human turncoat and former creator of the Spartan program, Dr. Katherine Halsey, who’s becoming quite the zealot herself.

I’m a big fan of Halo, but for some reason haven’t been reading Escalation from Dark Horse Comics. After finishing up with issue #15 though, I have to wonder why that is, since it’s actually a pretty great book. The ongoing series based in 343 Industries’ franchise, Escalation follows not the game’s hero Master Chief, but Spartans like Sarah Palmer.

It’s actually pretty cool, once you get past the fact that you probably won’t be seeing the Chief anywhere. And the associations set up here are great, including the all-new storylines and stuff that the games haven’t really touched too heavily on.

For starters, Palmer really really hates Halsey. I mean, you can imagine she would, but there’s something personal there that I assume is definitely heading somewhere. Also in this tale, a Sangheili joins the humans on their mission to find out exactly where the new Covenant is heading and how close Jul and Halsey are to getting the object that they’re looking for- an object that’ll give them a map to every Forerunner outpost and piece of technology in the galaxy.

What’s particularly great about this issue, and my timing, is that this is a jumping on point and the start of a new arc for Halo: Escalation. So even if you’re more or less unfamiliar with the characters that the book stars, you can pick up and read on without much question, as everything is pretty much laid out for you. At times, this can lead to an over-simplified, spoon-fed narrative, but I didn’t find too much of that in writer Duffy Boudreau’s work.

The story was snappy, loaded with action both on foot and in spaceships, and well done all around. And the new character of the free-thinking Sangheili Ayit ‘Sevi was actually so interesting that I would read a comic starring him. Actually, all the interactions between the Sangheili were great, and they were a bit more interesting than the human characters to me.

As for Ian Richardson’s art, it’s nicely detailed with a cartoony edge that I like a lot. In particular, his work on the Covenant and UNSC (human) starships and the more mechanical elements f the characters was terrific, really cool-looking stuff.

Centered around a good story set deep in Halo lore (and canon as well), and with some eye-catching artwork, Halo: Escalation #19 is an easy recommend for anyone who’s a big fan of the franchise. And for anyone else who’s interested in becoming one, this is the perfect issue to grab to get up to date.